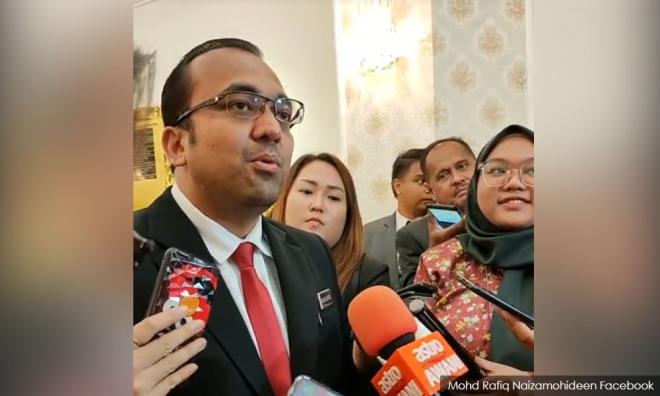 Bersatu leader: We will react if Harapan partners force Dr M to resign

"We will not compromise. We will give our full support to Mahathir to continue his job as prime minister. If there are any Harapan component party leaders who try to pressure Mahathir to resign, we will react.

"(As to) what action, we will think of one that is appropriate," he told journalists at the Malacca state assembly lobby this afternoon.

Rafiq (above) singled out Malacca DAP leader Chong May Lee who had suggested that the 94-year-old Mahathir retire now to "take care of his grandchildren instead of waiting until he was 100 years old".

"I would like to ask the Harapan leadership to support Mahathir in continuing with his duties as prime minister.

"I condemn the statements made by several leaders from Harapan components, including by a Malacca DAP assistant treasurer, which were inappropriate," said Rafiq.

The Paya Rumput assemblyperson said Bersatu would not remain quiet over such attacks.

"We will not remain silent. We will defend our Bersatu chairperson [...] I hope the demands for Mahathir to resign, including those by Harapan component party leaders, will stop.

"It is such demands that are causing instability in Harapan," he said.

He also questioned why the criticisms were only coming now and not when Mahathir helped lead Harapan in capturing federal power.

"When Mahathir led Harapan to capture Putrajaya, why was he not questioned? Why didn't Chong say then that he should have taken a rest and taken care of his grandchildren?

"This is like casting someone out after you have used them," said Rafiq.

Mahathir has admitted that the recent Tanjung Piai by-election defeat was worse than he had expected.

Mahathir, who previously had been adamant that there was no need for a cabinet reshuffle, said he was now open to the possibility following the landslide defeat.

He said he would be reviewing the performance of ministers before making a decision.