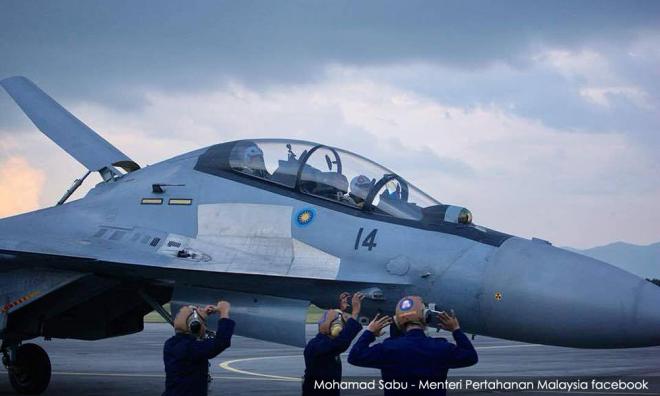 The Defence Ministry (Mindef) is still reviewing the offer by the Russian government for Malaysia to purchase its new fighter jets, said minister Mohamad Sabu.

However, the minister (above) said the Royal Malaysian Air Force (RMAF) has no plan for the purchase at the moment as Mindef is now focusing on defence assets meant for maritime security control and patrol to prevent foreign invasion.

“In this regard, the RMAF has prepared the Capability Development Plan 2055 or CAP55 which outlines the overall plan to transform the capability of the RMAF until 2055.

“The plan will cover the procurement of new assets in line with the passage of time, replacement of outdated aircraft, and the upgrading of existing assets.

"(This is done) by taking into account realistic planning factors based on timing and priority on the reduction of aircraft types while addressing wear and tear issues and increased cost of maintenance," he said in reply to Ahmad Fadhli Shaari (Pas-Pasir Mas) during question-and-answer session during the Dewan Rakyat sitting today.

Mohamad said the RMAF would continue to maintain its F/A-18D Hornet and Su-30MKM fighter jets for the duration of the 12th Malaysia Plan and 13MP.

"The latest requirements are the acquisition of the Maritime Patrol Aircraft and Medium Altitude Long Endurance Unmanned Aerial Vehicle as well as combat capabilities and pilot training through the procurement of the Light Combat Aircraft to enhance RMAF capability readiness,” he said.

Responding to a supplementary question from Wong Hon Wai (PH-Bukit Bendera) on when the Defence White Paper would be presented, Mohamad said it would be tabled in the current session.

It was previously reported that the Defence White Paper is in the final stages of preparation and is expected to be tabled in the Dewan Rakyat on Dec 2.