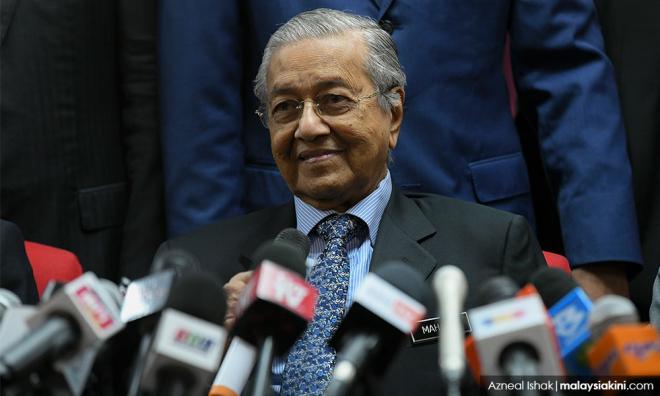 Umno repaying Dr M in his own coin

Latest developments in the political arena attest the reality that the party is shaping to beat the old fox at his now-familiar game.

Mahathir (above) forgets that people who endorsed his leadership of Pakatan Harapan last year did it despite doubts about his reformist credentials based on his conduct in his first 22-year stint (1981-2003) as Prime Minister.

The size of the task of unseating a 61-year BN regime had moved them to realistically root, despite qualms, for the success of a Mahathir-led revolt against BN’s kleptocrats at GE14 in May last year.

When between June and September this year they saw that the Harapan supremo had not sloughed off his old skin, they waited for a verdict from the Tanjung Piai by-election on Nov 16.

It came with what is regarded by many as a resounding rejection of Mahathir’s recrudescent Machiavellianism.

But Mahathir affects not to read it that way.

He proceeds, barring a nose bleed or two, on his serene path, oblivious to the Tanjung Piai polls signal to him to quit.

But, now, in the latest twist to the melodrama surrounding the power transition from Mahathir to heir presumptive Anwar Ibrahim, Umno is telling him, in the words of the Irving Berlin musical, “Anything you can do I can do better.”

The saga of the 18 Umno MPs who met up with PKR deputy president and incubating quisling Azmin Ali in the latter’s home in Putrajaya on the night of Nov 18 has taken a new twist.

Initially, from the stories that spread even before the start of the meeting, it seemed the 18 were acting from murky motives.

On Nov 19, some participants, Azmin (above) included, secreted information about the affair to a ravening press, that the discussions had been about matters to do with projects in their constituencies rather than with the politics besetting the ruling coalition.

Their differing versions had the effect of throwing up a smokescreen around it.

At this point, Mahathir chimed in to say that the 18 had wanted to defect to Harapan.

The morning of Nov 19, one of the 18 attendees got into a verbal slanging match in the lobby of Parliament with a non-attendee, who clearly wants his Umno colleagues to allow Mahathir to slowly twist in the wind of Harapan’s want of will to show their supremo the door.

By the evening on Nov 19, both Umno MPs kissed and made-up after an initial show of acrimony.

Clearly, Umno’s firefighters were quick to quell tumult and project unity in the face of evident discord in Harapan.

Nothing gives the Umno bunch greater retributive satisfaction than seeing Mahathir get his comeuppance for having led the national mutiny against Umno-BN.

The disclosure by Mahathir as to the Nov 18 meeting’s purpose had placed Azmin, who until recent weeks was more wronged than wronging in the saga of his relationship with Anwar Ibrahim, in a very bad light vis-a-vis his own party and Harapan components DAP and Amanah.

Harapan is caught between a rock (a by-election cashiered supremo who doesn’t want to quit) and a hard place (an heir presumptive chaffing at his long wait for a post coveted from his salad days).

Until Mahathir became Prime Minister in 1981 no major politician in Malaysian politics had played the Machiavellian game.

The former PAS president Mohd Asri Muda was right about Mahathir when asked for an opinion a few months after July 1981 when Mahathir became PM.

An astute political operator, Asri (above) said you could predict all three past presidents of Umno (Tunku Abdul Rahman, Abdul Razak Hussein and Hussein Onn) but not the latest one.

Surprise and unpredictability in politics – the ability to keep friends and foes guessing – are Machiavellian stratagems.

Bismarck was a ruminative man, not terribly enamoured of the amoral methods he adopted to attain his objectives. He gave the impression that for reasons of state (raison d'etat) he had to do what he did.

Tellingly, he said the aim of a statesman was to “listen to the rustle of God’s mantle in history and catch the hem of it for a few steps.”

This is a humbling description of a leader’s task, but no humility constrained the Iron Chancellor in his ruthless pursuit of German unity which he accomplished by restraining the forces ranged against him by manipulating their antagonisms. A Mahathir speciality one might say.

Unlike Bismarck, Mahathir is not a ruminative man. He must think he is surrounded by a menagerie of fools who he can readily bamboozle.

Before Mahathir’s disclosure of the purpose of the meeting between 18 Umno MPs and Azmin - a disclosure detrimental to the latter’s credibility - Azmin had already become soiled goods, which is a pity because he had been an effective menteri besar of Selangor (September 2014 to May 2018).

The Selangor Harapan coalition swept 51 of 57 seats in the country’s wealthiest state at GE14, an achievement that should have been a springboard for Azmin to the premiership.

Now, thanks to his putative patron’s desire to prolong his tenure as Harapan supremo, Azmin is trapped in the backwash.