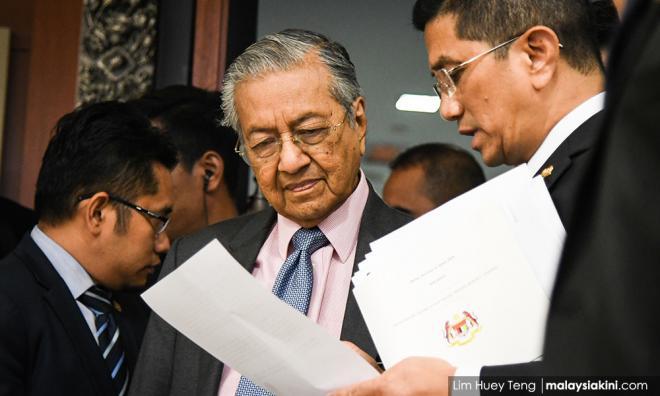 Their joint statement, also signed by Sembrong MP Hishammuddin Hussein, came a day after another seven Umno MPs similarly contradicted Mahathir's claim that the dinner participants from Umno had "lost" their party and were unsure of what to do politically, and that they were considering joining other parties.

"As was stated by the seven BN MPs yesterday, we also refute the claim that Umno leaders have supposedly lost our party and unsure of what to do, whether to jump ship or otherwise. We can confirm, the stand was never made by any BN MPs at any point during the meeting," said the BN MPs.

"In fact, as have been repeatedly stated in the past, we have absolutely no intention of leaving the party, let alone to join another party," they added.

Speaking at a press conference yesterday, Mahathir, when asked about the Nov 18 dinner, said he had heard from Azmin that some of the Umno MPs in attendance were contemplating defection.

Mahathir also claimed some of those Umno MPs also expressed their support to him.

It was initially rumoured that the meeting was led by Hishammuddin as part of a purported attempt to prevent PKR president Anwar Ibrahim's rise as prime minister to succeed Mahathir.

Hishammuddin subsequently denied the rumour and the eight MPs today reiterated that the issue of power transition was not discussed during the meeting.

"The issue of power transition is Pakatan Harapan's internal affairs. It has nothing to do with us as opposition parliamentarians," they said, adding the meeting only discussed issues affecting their constituencies.

At the same time, they also urged Harapan MPs who realised the people's purported rejection of the ruling government, to instead leave and join Umno-BN.

'Retaining Dr M as PM none of Umno's business'

"The only way to weaken Umno is by creating an internal crisis," said Khaled, who claimed that Mahathir had targeted several influential people to spark crisis within Umno.

He further claimed that Mahathir had adopted the same strategy to weaken PKR through Azmin, its deputy president.

Commenting further, Khaled said it was not the affair for Umno MPs to be involved in efforts to retain Mahathir as prime minister.

"That is Bersatu's business. To invite Harapan leaders to join Umno should also not be Umno MPs problem," said the former Johor menteri besar.

Khalid stressed that the most urgent duty of an Umno MP was to ensure the party emerges as a credible opposition in parliament, and convince the rakyat of its status as a progressive political movement.

While Azmin himself had been coy about the purpose of the meeting, other participants have provided different accounts of what happened.

Some claimed it had to do with projects while others claimed it was over the economy and the government's shared prosperity vision.