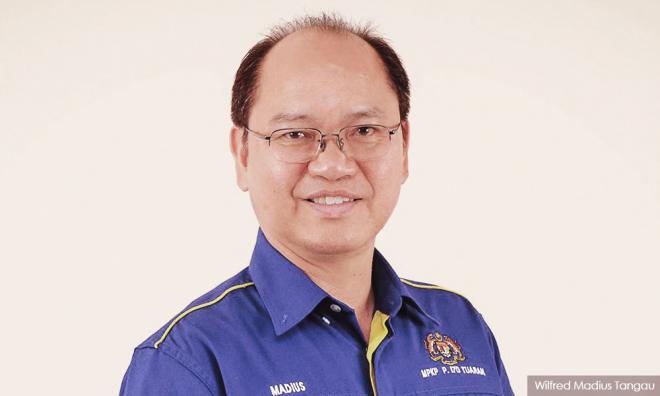 The United Pasokmomogun Kadazandusun Murut Organisation (UPKO) has been rebranded as United Progressive People of Kinabalu Organisation to ensure the party continues to be relevant.

Its president Wilfred Madius Tangau (above) said today the party decided to fulfill the current demands and aspirations of the people.

He said the party will drop communal politics and move to a universal and inclusive politics through rebranding but retaining the abbreviation UPKO.

‘’Although, all these while UPKO also championed the welfare of the people specifically to tackle numerous challenges in the people’s lives such as lack of employment opportunities, educational issues, environment issues, integrity in governance such as power abuse, corruption, dishonesty and injustice.

‘’However, sometimes the racial issues dominated the perception of the people towards UPKO more than everything else,’’ he said in his speech at the 2019 UPKO extraordinary delegates’ conference today.

Madius, who is the Tuaran Member of Parliament, said a rebranding of the party was carried out on Aug 8, 1999 by amending the Parti Demokratic Sabah (PDS) constitution and reviving UPKO.

“This incident was also an adjustment move towards the demands of the people’s aspirations and needs at that time,’’ he said.

Originally, he said UPKO was a party which was set up in May 1964 as a result of the combination of the United Kadazan National Organisation and the United Pasok Momogun Organisation, which were set up in January 1962, namely, two political parties with each championing the welfare and future of the Kadazan Dusun Murut (KDM) races.

However, following its defeat in the general election in 1967, UPKO was disbanded in December the same year.

A series of political crises in Sabah which led to the fall of the Parti Bersatu Sabah (PBS) in 1994 had triggered the formation of PDS under the leadership of Bernard Giluk Dompok.

However, PDS still did not succeed in uniting the KDM communities at that time until its dissolution which was followed by the re-establishment up of UPKO in 1999.

Madius, who is also Sabah Deputy Chief Minister, said the re-establishment of UPKO at that time was proven suitable with the aspiration and the political framework for two decades from 1999 to 2018.

‘’UPKO had poured numerous deeds to the people. But the 14th General Election results clearly showed that the aspiration of the people had changed greatly.

"As such, once again, UPKO was facing with a situation which prompted us to hold the 2019 UPKO Extraordinary Delegates’ Conference today to meet the demands of the rebranding of UPKO,’’ he said.