The police force and Umno parliamentarians who objected to the establishment of the Independent Police Complaints and Misconduct Commission (IPCMC) were not the majority and thus it should not erode the government's commitment to form the police watchdog. 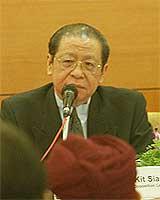 According to Opposition Leader Lim Kit Siang, this group of parliamentarians did not represent the majority of the Barisan Nasional MPs especially those from Sabah, Sarawak, as well as other component parties such as MCA, Gerakan and MIC.

"Unfortunately, the Sabah, Sarawak, MCA, Gerakan, MIC MPs, as well as the more level-headed and rational Umno MPs, seem to have been overawed and bullied by the group of vocal MPs into silence. In their heart, they know that IPCMC is good for the people, country and the police themselves," Lim said in a statement today.

He said the premier has been backing down from his public commitment to form the IPCMC as a result of these pressure.

He reiterated that the IPCMC is not a party issue as it concerns the best interests of the people and country to have a clean, incorruptible, professional, human rights-sensitive world-class police service.

"It is not to run down or humiliate the police but the contrary, to enhance police image and credibility to enjoy public confidence as the neighbourhood friends of the people," he said.

He said the failure to establish the IPCMC will itself be a most adverse reflection on the establishment of the Royal Police Commission and the delivery of Abdullah's reform pledge and programme.

"The Royal Police Commission is a feather-in-the-cap for Abdullah, proof of his political resolve 'to walk the talk', to effect reform.

"It would be most unfortunate and tragic if the Royal Police Commission ends up as the symbol of the failure of his reforms, because of the police success in hijacking the policy-making powers on the issue by turning over the support the group of vocal Umno MPs," he said.

He added that he has faxed to Abdullah who is also Internal Security Ministe a request for a meeting with him on the IPCMC.