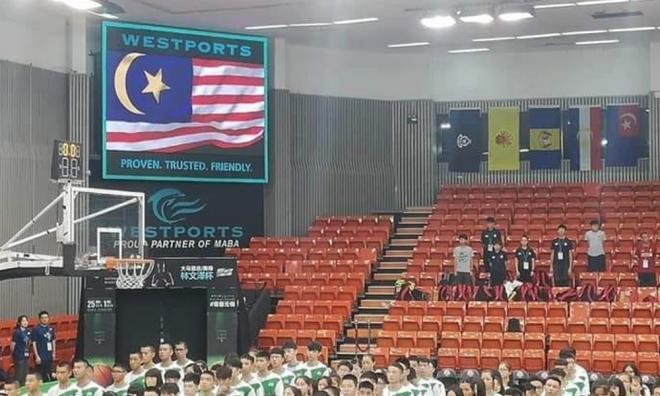 The Malaysian Basketball Association (Maba) has terminated the services of a contractor found to have displayed a wrong Malaysian flag during the opening ceremony of a basketball match yesterday night.

Maba president Luo Choon Hann said the contractor in charge of live streaming the event was terminated following investigations carried out by the association.

"First and foremost, as Maba president, I would like to apologise to all Malaysians. I would like to explain that the mistake occurred when the contractor involved in our live stream production was careless and used the wrong flag when Negaraku was played," said Luo in a statement released during a press conference this afternoon.

"When our executive officer realised the mistake, orders were immediately given to end and erase the video. We view this matter seriously and we will be cooperating with the authorities to investigate the matter," the association president said, who was earlier questioned by the police over the incident which had gone viral.

The flag, with a five-pointed star and 11 red and white stripes, was shown on the stadium TV screen as the national anthem was played together with the Westport Malaysia logo.

The Jalur Gemilang has a 14-pointed star and 14 red and white stripes that represent the nation's 13 states and the Federal Territories.

In a Facebook posting yesterday, Maba wrote: "To all our fellow Malaysians and basketball friends, tonight was the opening ceremony of the 28th MABA Milo Lum Mun Chak Cup (2019).

"During the ceremony, our live broadcast team accidentally displayed the wrong Malaysia flag on our stadium TV screen. We apologise for this mistake, and we take full responsibility for such actions.

"Please forgive us, as we are always striving to grow and develop the sport of basketball in Malaysia."

In a Facebook posting, the DAP lawmaker said he has contacted the president of Maba for an explanation.

"I call for stern action to be taken against those responsible because this concerns the Jalur Gemilang and cannot be taken lightly.

"The Jalur Gemilang is the pride of Malaysia," he said.

A video of the flag incident had since gone viral and courted criticism from netizens, with one of them, Rafi Awg Kechik, likening the four-pointed star to the Chinese flag.

"It is embarrassing. Why does our flag only have five points? If you don't like Malaysia and do not respect the Malaysian flag, please leave this country," he had said.

Meanwhile, PKR president Anwar Ibrahim urged organisers to ensure that such an incident will not occur again.

"The national flag is a symbol of the nation and the organisers must take extra precautions to make sure that the nation is given respect," he said during a press conference at the International Institute of Islamic Civilisation and Malay World (ISTAC) in Kuala Lumpur, today.

"It should not happen again."