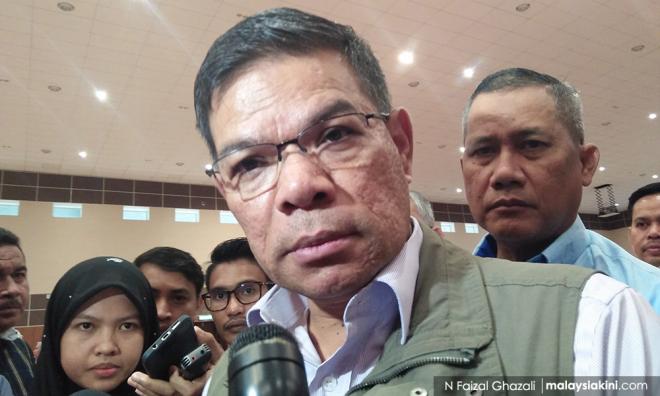 Saifuddin (above) said statements claiming that he and party president Anwar Ibrahim could review the decision were wrong because the party constitution does not authorise them to do so.

"But the constitution allows anyone who has been expelled to file an appeal within a stipulated period, and it will then be studied by the party’s appeal panel for further action,” he told reporters after attending the Domestic Trade and Consumer Affairs Ministry’s monthly gathering in Putrajaya today.

He was commenting on PKR disciplinary committee chairperson Ahmad Kasim’s statement that Anwar and Saifuddin could decide whether the expulsion order against MPP member Zakaria Abdul Hamid and Ismail Dulhadi should be revoked or maintained.

Saifuddin said the question of annulling the expulsion did not arise, although the MACC admitted that it had erred in sending a letter to PKR recommending disciplinary action against the two.

Saifuddin said the sending of the letter may have been a “procedural error”, but it did not change the facts of the case and MACC’s view that there were wrongdoings on the part of the two members.

"We should not shift from this fact because the most important thing is the recommendation and view of MACC that months of investigations showed that there were wrongdoings involving the two individuals, and that action should be taken,” he said.

He said the party was in the process of sending a letter to inform the two of their expulsion.

Meanwhile, Saifuddin said he was gathering information from Malacca PKR chairperson Halim Bachik and the Malacca Chief Minister’s office regarding the absence of two PKR state assemblypersons from the Malacca Legislative Assembly yesterday when a motion proposing the appointment of Halim as a senator was rejected by the House.

The motion, tabled by Chief Minister Adly Zahari, was defeated when it was opposed by 13 BN members and supported by 12 Pakatan Harapan representatives.

Saifuddin said he would table the matter at the party’s political bureau meeting once he had obtained complete information on the incident.