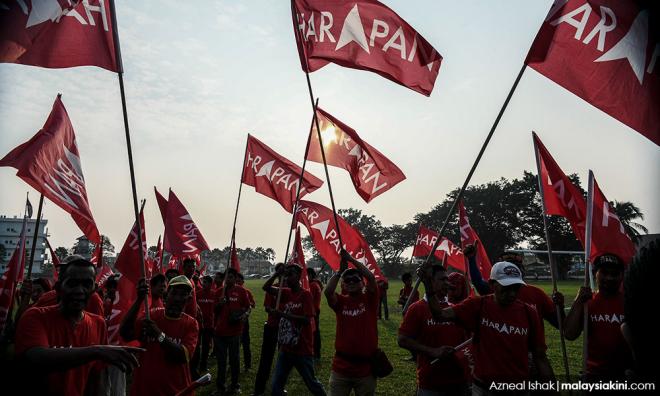 COMMENT | The overthrow of BN in the 14th general election was primarily fueled by the largesse of Umno leaders and their cronies redlining the spending engine into overdrive.

The response of Pakatan Harapan has been to pump the brakes while shifting into reverse. Try that in your Proton and you’ll be on the bus faster than you can say "national car".

The fact is, then and now, the only ones riding smoothly through the storm has been the political and business elite. This is not unique to Malaysia, of course.

Global income inequality is the dominant seed for social and political upheaval across the world, and the loudest rallying cry for nationalists and nationalism everywhere - from Donald Trump to Narendra Modi to Brexit to Italy’s Five Star and France’s Yellow Vests.

In Malaysia, nationalism is termed identity politics and we are heading down that sinkhole again, thanks to Umno and PAS playing on the highly-strung nerves of disgruntled middle and lower class voters - ironically the same demographic that got shafted by them in the last two terms of the former administration.

Do you think it’s likely to be different this time? That answer is 'yes', it will be far worse for those left outside the power and moneyed elite.

Not only will they lose the continuity of the policies instituted by Harapan, following the major initiatives of its rakyat-friendly manifesto, but there will be a new raid on the goodies by those at the top of the hierarchy.

This ugly truth of the reality of political change is the land grab by the new incoming kings and kingmakers. Democracy, after all, is a costly affair for the average Joe.

What we do know is that Harapan tightened the belt as soon as it took office, and Dr Mahathir Mohamad’s first order of business was the restoration of the nation’s financial assets.

By contrast, the “cash is king” dictate of the Najib Abdul Razak regime resulted in a feeding frenzy more in common with African dictatorships than Asian democracies. The definition of insanity is doing the same thing over again and expecting a different result.

While it is the right of the people to choose their leaders, flawed as ever they may be, it is nevertheless the dutiful obligation of those leaders to exercise their power with honor and responsibility.

The leaders of a democratic nation, or for that matter an autocratic one, are the last defence of the common citizen. History has shown that ignoring this golden rule of service will result in a decline and demise of the state.

We were perhaps oblivious to this over the last 62 years, under single-party dominated rule. Even states that appear to be exempt from this rule, like Singapore under PAP, will eventually succumb if they do not change their ways of arrogance and impunity.

The case for this was made ever so elegantly by Diana Sharma, an 89-year old Singaporean pensioner, in an open letter to PAP party cadres posted online.

Her two impassioned pleas were for the elites to 1) recognise the current state of affairs and to 2) serve with moral integrity. She asks for leaders to stand alongside common citizens to give them support against ever-rising cost-of-living, and increasing their income so that they can participate in the knowledge-based, high wages economy.

As the digital transformation looms this has never been truer, and must include fair access to education and training for all. She asks that we reflect deep in ourselves to see if we are serving the people’s best interests; and if not to step away from our self-interest alone and contribute towards building a system that contributes to equality and the common good, over the interests of the elitist few.

Harapan would be well-served to take her sage advice as a means of avoiding our own early demise in GE15. By-elections results have shown that we have many Dianas lurking within our own voting ranks.

It is still doable as Harapan has some time. About 3.5 years.