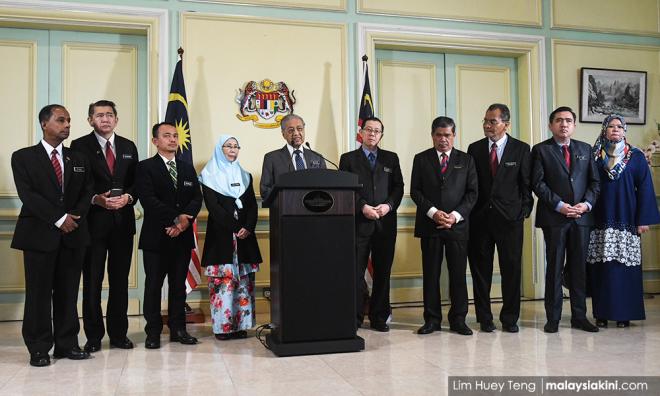 PM says some past reshuffles resulted in worse cabinets

"I've reshuffled before. When I resigned, that was a reshuffle. I handed over to someone else and see what happened," Mahathir said at a press conference in S Korea today.

This is believed to be a jab at his previous successors Abdullah Ahmad Badawi and Najib Abdul Razak, both of whom he helped depose.

The prime minister previously said he would consider a reshuffle following Pakatan Harapan's crushing defeat at the Tanjung Piai by-election but refused to commit to a timeline.

Asked whether he was satisfied with the current cabinet, Mahathir replied in the positive.

"For the time being, yes (I'm satisfied). I've changed people in the past and they (the new people) were worse, not better," he said.

He also said that as the cabinet reported to him, he knew how best to judge them.

"They don't know, but I know because they report to me (and) I know what they're doing.

"(But) other people (are saying) 'Oi, this is terrible, that is bad, wear black shoes and so on," he said.

Mahathir said the current cabinet deserves still more time as they were formerly in the opposition and are having trouble adjusting themselves to being in the government.

"Give them a chance until they show they are really useless, then we kick them out," he said.