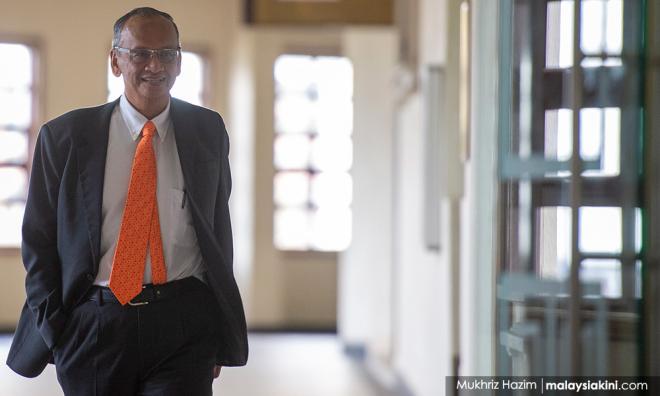 Former auditor-general Ambrin Buang today insisted that he had no political agenda behind the 1Malaysia Development Bhd (1MDB) report prepared by the National Audit Department (NAD) in 2016, the High Court here heard today.

The 70-year-old witness said he was only concerned about presenting the findings of the NAD to the Public Accounts Committee (PAC).

"The report had already been printed. We were all ready to defend our report to the PAC... Why should I have a political agenda?" he said.

Sri Ram: So, you were just the auditor-general doing your job?

Sri Ram: Who appointed you? Your appointment was constitutional? You were not a civil servant?

Sri Ram: Did you consider that you performed the role?

He was earlier asked about a coordination meeting held on Feb 24, 2016, to discuss amendments to the 1MDB report following instructions from Najib.

Najib is represented by Muhammad Shafee Abdullah and Arul Kanda by counsel N Sivananthan in the case hearing.

Najib was charged with using his position to order amendments to the 1MDB final audit report before it was tabled to the PAC to avoid any action against him.

He was charged, in his capacity as a public officer, which was as prime minister, with using the position to obtain gratification for himself to evade disciplinary, civil or criminal action against him in connection with 1MDB, by ordering alterations to the 1MDB final audit report before it was finalised and tabled to the PAC, where he directly had interest in.

Najib was accused of committing the offence at the Prime Minister’s Department Complex, Federal Government’s Administrative Centre, the Federal Territory of Putrajaya between Feb 22 and 26, 2016. The charge is under Section 23(1) of the Malaysian Anti-Corruption Commission (MACC) Act 2009 which carries a maximum jail term of up to 20 years and a fine of no less than five times the amount of gratification or RM10,000, whichever is higher, upon conviction.

Arul Kanda was charged with abetting Najib in making amendments to the report to protect Najib from being subjected to disciplinary, civil or criminal action in connection with 1MDB, at the same place and time and in accordance with Section 28 (1) (c) of the MACC Act 2009 read with Section 23 (1) & 24 (1) of the same Act which provides for similar punishment, if found guilty.

The trial before judge Mohamed Zaini Mazlan continues on Jan 9, 2020.