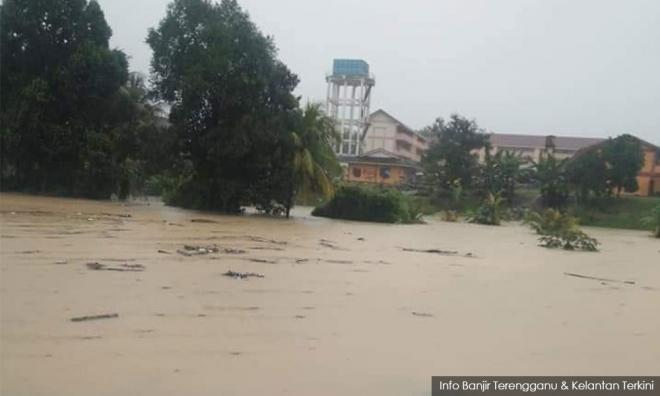 A total of 2,296 people from 648 families have been evacuated to higher grounds since floods hit Terengganu yesterday, an increase from 875 people from 258 families last night.

They are being given temporary shelter at 40 flood relief centres which have been opened in four districts, with 21 of the centres in Besut.

According to the Social Welfare Department’s InfoBencana, a total of 1,148 people from 290 families have been evacuated to the 21 flood relief centres in Besut until 8 am today, from only 457 people (113 families) at 10 relief centres last night.

The Setiu district also recorded an increase in flood victims, to 553 people from 189 families at 10 centres, from 362 people, involving 131 families last night.

The floods in Hulu Terengganu has forced 112 people (35 families) to be evacuated to five relief centres, from 48 people (12 families) at three centres last night.

In Dungun, four flood relief centres have been opened to accommodate 483 people from 134 families. As of last night, there were only eight evacuees.

The Drainage and Irrigation Department, in its portal at http://infobanjir.water.gov.my/, stated that the water level at Sungai Dungun in Kuala Jengai was 22.45m exceeding the danger level of 21m, while Sungai Setiu at Jambatan Permaisuri recorded a reading of 8.95m. the danger level is 8.8m.

Meanwhile, the number of flood evacuees in Kelantan has increased to 315 people at 8 am today, from 185 people last night.

According to the Social Welfare department’s InfoBencana, Machang is the third district to be hit by the floods, after Kuala Krai and Tanah Merah yesterday.

In Machang, a total of 37 people, involving 15 families, have been evacuated to the flood relief centre at Sekolah Kebangsaan (SK) Pak Roman.

In Tanah Merah, 103 people from 26 families have so far been evacuated to six flood relief centres in the district.

According to the Drainage and Irrigation Department’s website, at http://publicinfobanjir.water.gov.my, the water level at two main rivers in Kelantan has breached the warning level.

So far, the flood situation has not affected road links in Kelantan.