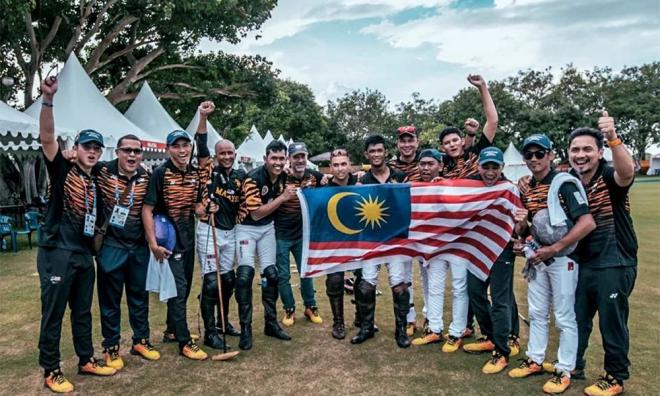 M'sia turns the tables on Philippines to retain polo gold

Malaysia scored a dramatic victory over favourites the Philippines in the polo final of the 30th SEA Games today to retain the gold medal.

The 7-5.5 win at the Miguel L Romero Polo Ground in Batangas, near Manila, not only confirmed Malaysia’s dominance of the game in the region but was also sweet revenge for the 5-8.5 defeat by the Philippines in a round-robin match on Nov 26.

National team manager Mohamad Zekri Ibrahim said Malaysia prevailed despite having to compete on borrowed horses because the host nation did not allow the import of horses.

He said the wide exposure gained by the national polo players in tournaments organised by the Royal Malaysian Polo Association was the main factor for their success in defending the gold they won at the last Games in Kuala Lumpur.

"We could not conduct thorough preparations because of the prolonged rainy season and uncertain weather in Malaysia.

"It was a thrilling match and Malaysia were not viewed as the favourites. But from the start, the national team planned their moves well by checking the movements of the Philippines’ main oemian player who also has the highest handicap in the tournament,” he told Bernama when contacted.

"This win can be attributed to our indomitable spirit as on paper Malaysia were not given much of a chance to retain the gold due to lack of ‘horse power’," he said.

Malaysia also won the polo gold at the 2007 Games in Korat, Thailand.