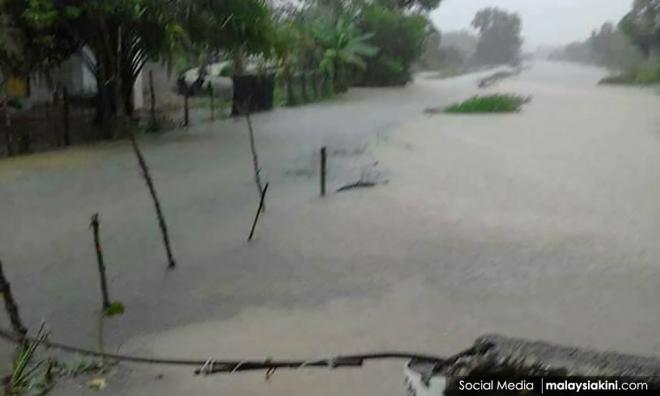 More than 11,000 displaced by floods in Kelantan, Terengganu

The number of Terengganu flood victims has increased drastically to 5,807 people from 1,719 families as at 8am today, compared with 2,387 (650 families) as at 8pm last night.

In Kelantan, more people continue to be evacuated due to the floods, with 5,636 people from 1,621 families being accommodated at relief centres in seven districts in the state as at 7am today, compared with 2,652 victims, involving 781 families, last night.

Meanwhile, according to the Drainage and Irrigation Department’s website, the water level in three rivers in Kelantan has exceeded the danger level.

Water in two rivers has risen above warning level

Three rivers showed readings that exceeded the alert level. They are Sungai Galas at Limau Kasturi and Dabong, and Sungai Kelantan dat the Customs Jetty.

In Kuala Terengganu, the flood situation seems to worsen. A total of 55 flood relief centres have been opened in Terengganu since early today to accommodate the new evacuees, bringing to 121 the total number of flood evacuation centres that were opened since floods hit the state.

According to the Drainage and Irrigation Department’s website, five rivers in three districts in recorded reading of above the danger level at 7am today.

Two of the rivers are in Setiu, namely Sungai Nerus in Kampung Langkap and Sungai Setiu in Kampung Besut.

The other rivers are Sungai Berang at Kampung Menerong and Sungai Telemong at Kuala Ping, both in Hulu Terengganu, and Sungai Besut at Kampung La in Besut.

In Pahang, the flood situation remains the same with three people still at a relief centre in Rompin.