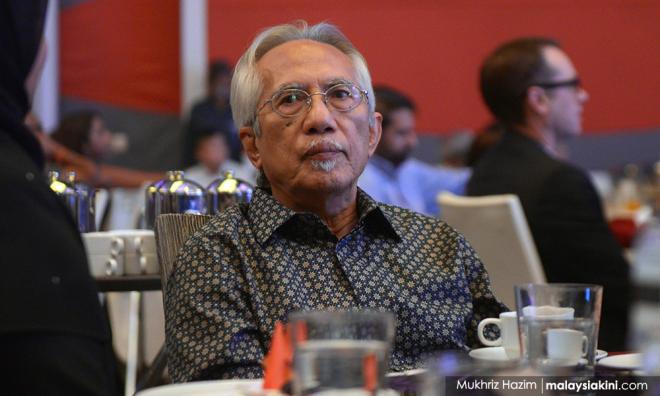 Dr Mahathir Mohamad could appoint PKR president Anwar Ibrahim as a special functions minister, according to A Kadir Jasin.

Sharing his thoughts on the prime minister's decision to reshuffle the cabinet following Pakatan Harapan's crushing defeat in the Tanjung Piai by-election last month, he said it is timely to examine Anwar's role.

“The cabinet reshuffle is sorely needed not only because Harapan's ratings are falling but also because several ministers are clearly not performing.

“The prime minister could bring Anwar into the cabinet as a special functions minister although the latter had said, jokingly, that he wasn’t applying for a cabinet job,” he said in a blog posting today.

Kadir, who is Mahathir's media and communications advisor, said it would be good to reduce the politicking and concentrate on governing the nation.

Commenting on the transition of power between Mahathir and Anwar, the veteran newsperson said it is best to leave this issue to both of them.

“Interference could jeopardise the agreed transition,” he added.

The former New Straits Times Press (NSTP) group editor-in-chief also offered advice for Anwar, which was based on the 1998 episode.

“And if Anwar had learned anything from the past, I believe he should rein in his impatient supporters,” he said.

On Sept 2, 1998, Mahathir, during his first tenure as prime minister, had sacked Anwar on moral grounds, which the latter claimed were fabricated.

Back then, there were those who argued that the fallout was a result of Anwar's impatience to succeed Mahathir.

Despite the pair's repeated assurances that the transition would happen according to plan, speculation is rife that Anwar would be sidelined.

Anwar not as good as Dr M in managing foes

Meanwhile, Kadir recalled how Anwar commented about the similarity of their shirts when the two met at Malaysiakini's 20th-anniversary dinner in Kuala Lumpur on Nov 23.

“Anwar is a sartorially conscious person and an expert at disarming opponents but may not be as good as Tun (Mahathir) in managing enemies.

“I believe that is also the reason the two men 'grudgingly' acknowledge each other’s strengths and weaknesses,” he added.

Acknowledging that he did not always agree with Anwar when he was the deputy premier and this had partly made life difficult as a newsperson, Kadir, however, also disagreed with demonising him.

“I believed that there should be a limit to demonising him in the media following his 1998 sacking from Umno and the government, and his subsequent imprisonment for abuse of power and sodomy. The latter conviction was overturned in 2004.

“I thought he had suffered enough and, furthermore, he thrived on publicity. The more he was condemned in the media the more his supporters would rally around him.

“I wasn’t altogether wrong. Although BN succeeded in retaining a two-third majority in the 1999 general election, the opposition did well and Anwar’s Reformasi lived on.

“That was principally the reason why I resigned as the group editor-in-chief of the NSTP in 2000. I disagreed with the view that the media should continue to demonise him and actions be taken against his alleged supporters in the media,” he added.