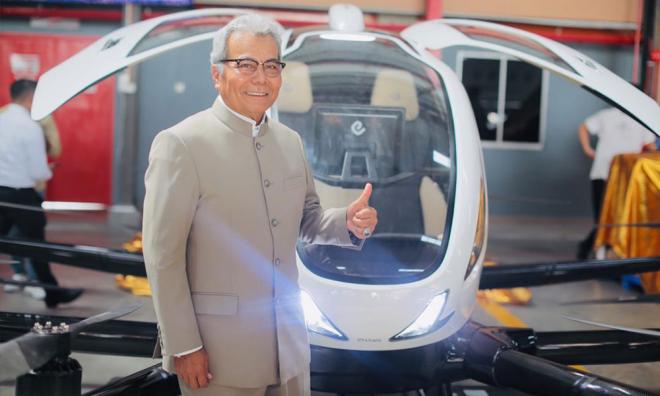 COMMENT | "Those with new ideas are leaders. In business, they will become market leaders." - Dr Mahathir Mohamad

In the past few weeks the subject of the "flying car" has been in the news almost every day. This interesting new topic has been opened for discussion since the Minister for Entrepreneur Development (MED), Redzuan Yusof (above), popularly referred to as Pak Wan, revealed a scaled down model of an air mobility unit at Langkawi Lima show at the end of last year.

Since then several versions of the proposed air mobility vehicle ranging from drone-based technology, like eHang (below), a vertical take-off and landing version called Volante, and several others such as Volocopter and Aeromobil, have surfaced from their research labs in countries like Japan, the UK, South Korea and China.

In Malaysia, perhaps due to a lack of data and information, the subject of ‘flying car,’ as advanced by Pak Wan, has been overly criticised and ridiculed, even inside our house of parliament.

The PAC, as a responsible committee, should not question why the government spent RM20 million of public funds on air mobility research. It should be asking that if this is a new industry that will drive Malaysia’s economy forward in line with IR4.0, Malaysia’s MED should be spending 20 times more.

This is to ensure that Malaysia could become a high tech country that we always aspire to be, so we could export this type of vehicles to other countries. This is the entrepreneurial spirit that we, as voters, would like to see coming from PAC, not restrictions, but more encouragement.

The sad part is that many of the reports published in the local media have failed to undertake any form of research on the subject matter, comments of which were put forward without much facts and figures. Having prior knowledge can make a difference to a discussion, what more if supported with technical data and information.

As a keen engineer, Pak Wan strongly feels that our private sector SMEs, many of whom operate under his ministry, should not get left behind, especially in the run up to IR 4.0.

Drone technology, EV, air mobility, agrotech and battery tech are some of the key areas which we should explore and invest in. Explicitly, he said that if we fail to embrace them, we will get left behind.

Pak Wan has always talk about entrepreneur development, which is about crafting new ideas, developing innovation and progressing the thought processes that may be disruptive to the current systems.

He feels that his ministry must demonstrate this commitment and innovate the way the ministry itself is being run. It should display a new way of thinking, managing and administering its expected roles and functions, in the same way that new ways of doing things are taking place in the private sector.

As an entrepreneur development ministry, MED should do away with traditional practices and pave the way for budding entrepreneurs to emulate. It should be tip-top in the usage of technology and reduce the number of staff required to execute the co-ordination and facilitation tasks. The current 640 staff members in the Ministry is simply a few too many.

Also, the ministry shouldn't descend into a regulatory role, as often perceived by many civil servants under its wing.

While Pak Wan has emphasized his role effectively, others around him may lack a similar degree of understanding and enthusiasm.

Entrepreneurship is about developing as many start-up individuals and companies as possible, so that new ideas, approaches and techniques could be investigated, evaluated and scrutinised in order to drive the new economy. It is definitely not about assisting large firms to get new businesses or new projects.

New ideas must also be allowed to flourish and introduced to the marketplace in a similar fashion that Air Asia was allowed to start and grow.

Screening of these new ideas should not be the prerogative of civil servants. Perhaps this is where his Ministry took a wrong turn. Ideas have to be explored, debated, tested, modified and commercially promoted. Not sat on for months for the bureaucrats to be satisfied that they have not breached any regulations or practices.

Funding, an important component in determining the failure or success of an entrepreneur, must be considered and treated fairly. The last person who should be doing the evaluation for funding purposes, is a bureaucrat.

Instead, angel investors should be consulted and brought in as early as possible; otherwise start-up companies would die a natural death. Countries like US, Taiwan, South Korea, Germany and India have spent a lot on start-ups. That is why we keep hearing of their newly commercialized products and services.

We should be asking two pertinent questions:

Why is it that Malaysia, despite being hailed previously as a new economic tiger of Asia, has not managed to come up with any new, innovative ideas, let alone any new inventions that we could export?

Why is it that we continue to be a tech-user country, but not a tech-producing nation?

The answer lies in the fact that the entrepreneur development ministry was abolished by Najib Razak in 2009. Policies, rules and regulations on entrepreneurship did not exist.

Entrepreneurs have been treated very much the same way as a trading company. Profitable track records of their trades are required by banks and funding agencies prior to any loans or investments.

Under such an outdated economic climate and old regimented control, especially on the control of licences, permits or approvals, entrepreneurs could not grow, let alone mushroom in both quality and numbers.

Pak Wan is trying very hard to change all these and create a new ecosystem that would favour entrepreneurs rather than traders or commissioning agents, as was the business approach practised in the past.

Obviously, there are many challenges. As far as entrepreneurship is concerned, we have been dormant for nearly 10 years.

Now that we are awake and Pak Wan is starting to ‘fly’, the least other ministries could do is to allow that autonomous path to exist. A new ecosystem neesd to be created to allow economic potential to grow.

ROSLI KHAN is a transport and logistics professional, academician, consultant and company director with over 30 years of experience.