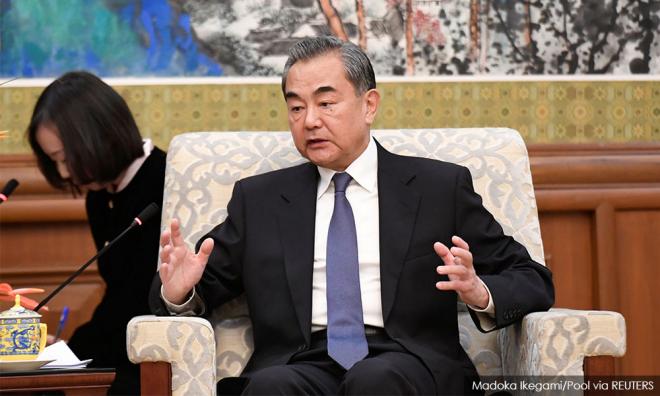 Chinese diplomats have been instructed to promote Beijing's view more aggressively as the country grapples with the trade war with the US, anti-government protests in Hong Kong and other crises that could dent its image.

The government's top diplomat, Wang Yi (above), prodded officials at a foreign ministry gathering last month to display stronger fighting spirit in the face of international challenges, three sources with knowledge of the matter said.

While Wang did not give explicit direction at the event, the instructions come after several senior Chinese diplomats set up Twitter accounts, some of which have been used to attack Beijing's critics.

More than 1,000 current and former officials attended the event in Beijing, singing patriotic songs to celebrate the 70th anniversary of the founding of the foreign ministry.

"This is the first time we have been told to show more fighting spirit," said one source who attended the celebration.

Wang's comments reflect President Xi Jinping's (below) revamp of foreign and military policy, in which he has abandoned the approach laid out by reform architect Deng Xiaoping, who said China should hide its strength and bide its time while it developed.

Xi's wide-ranging policies have included the multi-billion dollar Belt and Road Initiative and the establishment of the China-controlled Asia Infrastructure Investment Bank.

On Monday, the foreign ministry made its debut on Twitter. One of @MFA_China's inaugural tweets outlined China's response to a new U.S. law on Hong Kong while another took a poke at the case of a man claiming to be a Chinese spy seeking asylum in Australia.

State-run Chinese news outlets have had a presence on overseas social media platforms for years.

And the government has been accused of being involved in other ways - Twitter and Facebook said in August they had suspended hundreds of accounts that they said were part of a coordinated state-backed effort by China to undermine protests in Hong Kong.

Beijing has defended the right of Chinese people and media to make their voices heard in Hong Kong.

In the last few months, Chinese ambassadors and other senior diplomats have set up at least a dozen Twitter accounts.

The new accounts reflect efforts by the Chinese Communist Party (CCP) to attempt to re-shape the global narrative, said Anne-Marie Brady, a Chinese politics specialist at the University of Canterbury in New Zealand.

"China's international image is a big preoccupation for the CCP leadership," she said.

Hu Xijin, editor-in-chief of the Global Times newspaper which is published by the party, said China's pushback, while perhaps appearing defensive at times, was natural.

The West's voices are more numerous and its "apparatus of public opinion" more developed than China's, he told Reuters.

"I think this is a problem for China," he said.

Zhao Lijian, a deputy head of the ministry's information department, has been one of the highest-profile diplomats on the platform, building on a Twitter following he started when posted to Pakistan until taking his new post in October.

Mike Chinoy, a non-resident senior fellow at the University of Southern California's U.S.-China Institute, said he expected China to aggressively make use of social media, perhaps even drawing inspiration from the U.S. president.

"I assume there are diplomats in the foreign ministry and elsewhere in the Chinese bureaucracy who've been watching the extraordinary skill with which Donald Trump used Twitter to shape the political debate in the States and beyond, and so why can't we do that too?"