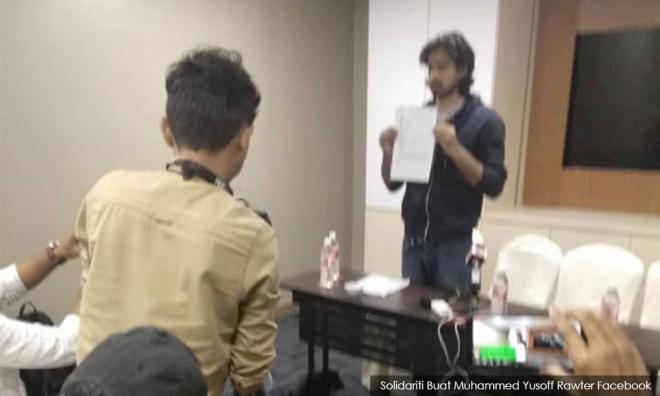 PKR president Anwar Ibrahim has been accused of sexual misconduct by a former staff member, just six months after the party was rocked by a sex video scandal which had implicated his deputy, Azmin Ali.

The latest allegation was made by Anwar's former researcher officer Muhammad Yusoff Rawther in a statutory declaration dated Nov 19. Malaysiakini cannot independently verify the authenticity of the document.

The purported statutory declaration was released just a day before the PKR annual national delegates' congress to be held in Malacca tomorrow.

Yusoff had released his statutory declaration today during a "press conference" at an unknown location. There appeared to be only one microphone and one audio recording device in front of him.

A newly-created Facebook page with an eight-minute video recording of the "press conference" was then shared with the press.

In the video, Yusoff complained that his previous police report against Farhash, accusing the latter of assault on May 16 at Anwar's office in Petaling Jaya, has been ignored.

In the purported statutory declaration, also made available on the Facebook page, he claimed that he was the victim of indecent exposure, molest and a lewd proposal during the incident allegedly committed by Anwar on Oct 2, 2018, at the latter's residence in Segambut.

Yusoff is alleging that the purported incident took place on the fourth day of the Port Dickson by-election campaign. Anwar was the Pakatan Harapan candidate and eventual winner of the by-election.

In the video, Yusoff said he had confided in Badrul Hisham who suggested that he document his experience under oath.

Yusoff also described Anwar as a "close family friend" in the video.

"Kononnya he is a family friend, respected by Grandfather, (however) the nature of the things that occurred between me and him is against everything that he so-called stands for.

"It is an embarrassment. For someone who knows the truth, it is not easy," said Yusoff.

When contacted by Malaysiakini, Bukit Aman (CID) director Huzir Mohamed said no police report has been lodged over the alleged Oct 2, 2018, incident detailed in the purported statutory declaration.

Last night, Badrul Hisham took to his Facebook page to deny any involvement in a "scandal". It is uncertain what he was referring to. However, his posting was accompanied by screenshots of phone messages referring to a "PC Skandal DSAI".

In a statement this evening, Farhash accused Yusoff of being manipulated by Badrul Hisham.

"This is a clear example of someone out to seek vengeance and willing to let himself be manipulated and used to fulfil his own agenda," said Farhash.