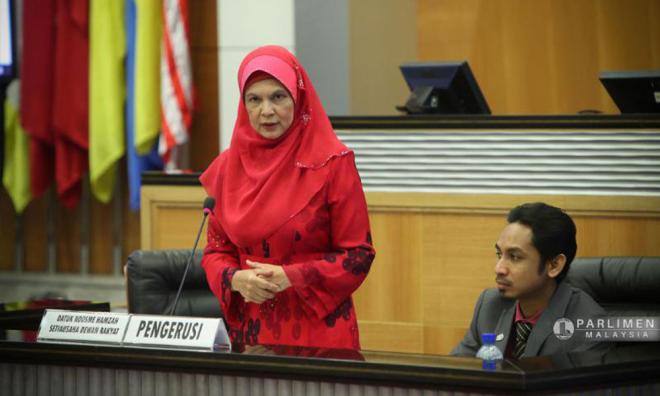 Since more than a decade ago, the sweet voice of Roosme Hamzah (above) would echo in the Dewan Rakyat before the meeting starts, fulfilling her role as the Dewan Rakyat secretary, one of the important people in Parliament.

Yesterday, which was the last day sitting of the third meeting of the second term of the 14th Parliament, was the last time her voice echoed in the august House, for Roosme, who is the first woman Dewan Rakyat secretary, made her exit as she goes on compulsory retirement early next year, after holding the post for 19 years.

As always, in discharging her role as the Parliament secretary, she started the meeting with the word “doa” before reading out the order for the day’s meeting.

For Roosme, who was appointed to the post on Dec 26, 2007, yesterday will be a memorable day when Deputy Speaker Nga Kor Ming, on behalf of members of the august House, thanked her for her service.

“...today is the last day for Datuk Rosmee Hamzah to be in charge of the Dewan Rakyat affairs, after 40 years in the public service and 19 years of serving this august House," said Nga, followed by a round of applause from the parliamentarians.

According to Roosme, her daily routine at Parliament begins at 8am when she has to prepare the order for the meeting and the relevant documents to ensure the meeting goes smoothly.

“Of course, at night, if the meeting ends late, I also have to work late, to make sure the meeting arrangements are up-to-date for uploading at the Parliament portal for the public, as well as parliamentary members, to access,” she said.

She thanked Dewan Rakyat Speaker Mohamad Ariff Md Yusof for his confidence in her to carry out her responsibilities during the transition period.

Roosme joined the civil service on Aug 1, 1989, and prior to her appointment as the secretary for the Dewan Rakyat, she was with the Ministry of Agriculture and then the Ministry of Finance.

Her main role as the Dewan Rakyat secretary was to assist the speaker to ensure proceedings in the House run smoothly.