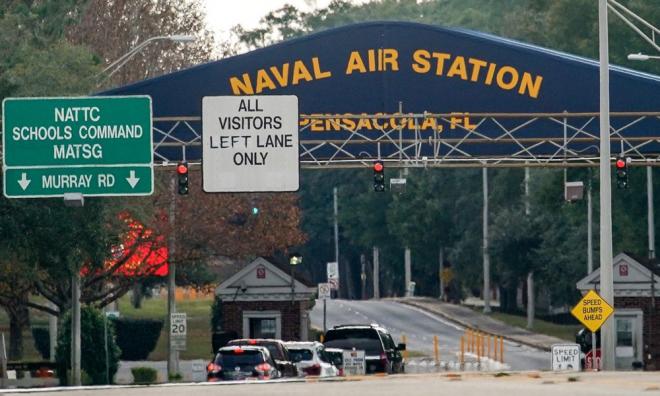 Saudi airman may have become radicalised before US Navy base attack

A Saudi airman accused of killing three people at a US Navy base in Florida appeared to have posted criticism of US wars and quoted slain al Qaeda leader Osama bin Laden on social media hours before the shooting spree, according to a group that tracks online extremism.

Federal investigators have not disclosed any motive behind the attack, which unfolded at dawn on Friday when the Saudi national was said to have begun firing a handgun inside a classroom at the Naval Air Station Pensacola.

US Defence Secretary Mark Esper said yesterday he was not ready to label it an act of terrorism.

A vigil was held yesterday for those wounded and killed, among them a recent Naval Academy graduate who dreamed of being a fighter pilot, according to the victim’s family.

A sheriff’s deputy fatally shot the gunman, authorities said, ending the second deadly attack at a US military base within a week. Within hours, Saudi Arabia’s King Salman had called US President Donald Trump to extend his condolences and pledge his kingdom’s support in the investigation.

Authorities confirmed the suspect was a member of the Royal Saudi Air Force who was on the base as part of a US Navy training programme designed to foster links with foreign allies. They declined to disclose his name or identify his victims.

He was reported to have played videos of mass shootings at a dinner earlier in the week with other Saudi aviation students, according to media reports that cited an unnamed person briefed on the investigation.

Investigators have found no sign Alshamrani had links to international terrorist groups and think he may have radicalised on his own, the New York Times reported, citing an unidentified US official.

It said the airman first entered the US last year, returned to Saudi Arabia, then re-entered the US in February, and had reported for training at the base about three days before the attack.

At least three of the eight people wounded were law enforcement officers shot as they responded to the attack, officials said, including one Navy police officer and two county sheriff’s deputies.

In comments to reporters at the White House yesterday, Trump said the Saudi king and crown prince were “devastated” by what took place, and that the king “will be involved in taking care of families and loved ones”.

Six other Saudi nationals were being questioned by investigators in Florida, three of whom were seen filming the incident, the New York Times reported, citing an unidentified person briefed on the investigation. — Reuters