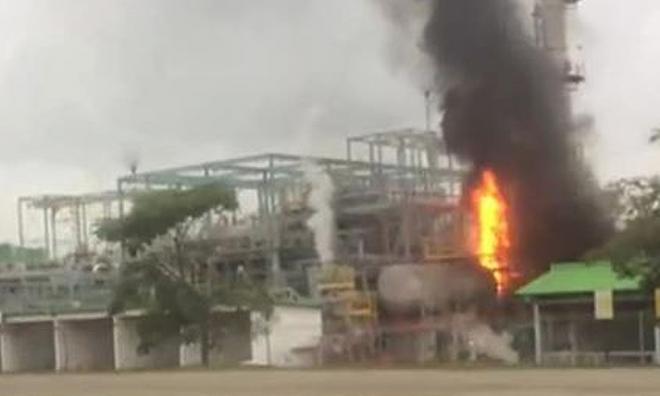 A total of 12 chemical factory workers on Jalan Nibong 1, Tanjung Langsat Industrial area near Pasir Gudang, sustained burns in a fire at the factory yesterday.

Seri Alam district police chief Supt Ismail Dollah said the fire, which happened at around 9.21am to 9.27 am, was completely put out by Lotte Chemical Titan (M) Sdn Bhd firefighting unit.

"The incident resulted in 12 workers sustaining burn injuries on their body.

"Two of them were treated at Sultan Ismail Hospital here while four were at Pasir Gudang Penawar Hospital. Another six were given outpatient treatment at Penawar Hospital," Ismail said in a statement.

Ismail said the cause of the fire is still under investigation.

"The fire involved several drums of the solvent outside the factory and the fire did not involve the structure of the factory," Yahya said.

fire
workers
chemical factor
pasir gudang
Related Reports
Giant fire near Sydney may take weeks to be put out
a year ago
Three family members perish in house fire
a year ago
There were signs Nazrin's room deliberately set on fire - Witness
a year ago
Indonesian fires burnt 1.6 million hectares of land this year: researchers
a year ago