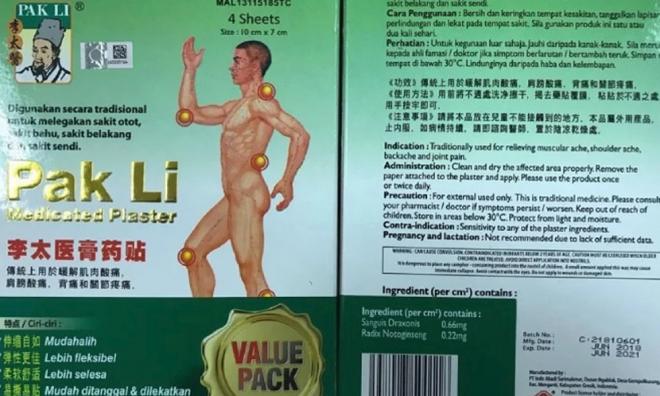 The Health Ministry has advised the public to avoid buying and using the traditional product "Pak Li Medicated Plaster" after it was found to contain the scheduled poison diphenhydramine.

Its director, Dr Noor Hisham Abdullah, said the registration of the product was cancelled on Dec 5 after diphenhydramine, which is not allowed in its formulation, was found in it.

Noor Hisham said diphenhydramine is an antihistamine that is controlled under the Poison Act 1952 and can only be prescribed by a doctor or pharmacist.

“Diphenhydramine is used to relieve allergies and its side effects when used topically include rashes, itchiness and sensitivity to light,” he said in a statement today.

Noor Hisham said sellers and distributors of the product must stop selling and distributing it immediately as it contravened the Sale of Drugs Act 1952 and the Control of Drugs and Cosmetics Regulations 1984.

“A company which commits an offence will be fined up to RM50,000 for the first offence and RM100,000 for subsequent offences," he said.

He added that members of the public who are still using the product are advised to immediately stop and to get advice from health professionals if they experience discomfort or any adverse effects.

“Members of the public can check the registration status of a product through the website www.npra.gov.my or download the application "NPRA Product Status" from Google Play Store," he said.