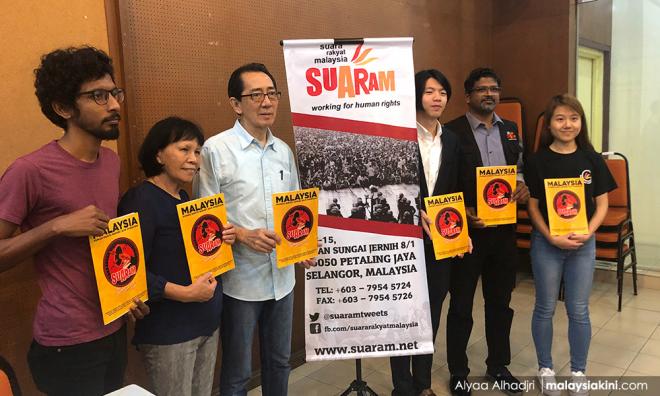 COMMENT | This is the first full year report card on the PH government’s human rights record. Unfortunately, like the previous BN government, detention without trial, enforced disappearances, killings and tardy police action remain the top civil and political rights concerns. There is a serious credibility crisis of police efficacy and the home minister’s lack of accountability. As for economic, social and cultural rights, the issues related to creeping cronyism in mega contracts and the climate crisis are also our main concerns today.

The buck stops at the Home Ministry

The Ministry of Home Affairs is responsible for law enforcement, public security, public order among other functions. The police are answerable to him. The buck stops at his ministry. He is answerable for all detentions without trial (DWT). While the government may try to justify the use of Sosma and other DWT laws by pointing to the threat of international terrorists, the use of these laws continue to be abused – the latest being the alleged LTTE terrorists.

While apologists for the PH government have tried in vain to blame these actions by the regime on the so-called “deep state”, the home minister remains responsible for these police actions. These lame apologists should be reminded that the so-called "deep state" is a conspiracy theory involving collusion and cronyism at the very top of the elected government and not feet dragging or acts of sabotage by civil servants.

But while the police would have us believe they are more than capable of dealing with international terrorists, they appear to be clueless about the whereabouts of Pastor Raymond Koh and the other cases of enforced disappearances. And more than ten years after the death of Teoh Beng Hock, there are still no criminal investigations into the culpable homicide surrounding his death.

The police have also failed to apprehend the killers of Bill Kayong, the land rights defender and to ascertain who are the two persons in the video released by an associate of the economic affairs minister who claimed that the minister had a sexual relationship with him in a hotel in Sandakan during the by-election there not too long ago.

Meanwhile, Zakir Naik and Jho Low (above), refugees from justice in India and Malaysia are proving to be more elusive than international terrorists. The latest example of the home minister’s warped priorities is his order to the police to investigate all who attended the 30th anniversary forum of the Hatyai Peace Accord even though these included leaders in the PH government.

These cases point to a credibility crisis surrounding the professionalism of the Malaysian police, for whom the home minister must be responsible.

Now that the dust from the BN’s “kleptocracy scandal” has settled somewhat, we are beginning to see the return of the crony capitalism that we were so familiar with in the Eighties and Nineties. Dr Syed Husin Ali has called this “kleptocratic cronyism” but it is basically the same privatisation of national assets to cronies of the ruling elite. In August 2018 the entire Khazanah Nasional Bhd board resigned after Mahathir refused to grant a meeting with Khazanah’s CEO Azman Mokhtar, giving Mahathir carte blanche to select a new board and CEO.

Doublespeak is alive and well in “New Malaysia” when the ruling elite can - with a straight face – justify the Bumiputera Agenda in the national ‘Shared Prosperity Vision’. Good governance seems to have gone out the window after the post-GE14 cosmetic “Institutional Reforms”.

We saw how recently, after Anwar warned Mahathir that there are ministers giving out contracts, Mahathir replied, “Yes, ministers can give out projects in their portfolios. Why not?”

Cronyism goes hand in hand with political patronage. Prof Edmund Terence Gomez has pointed out that political appointments to government-linked entities continue to be a practised under Prime Minister Dr Mahathir Mohamad's administration despite Pakatan Harapan's promises of reforms:

"Through this system, because they get a stipend, they get access to this government money which is then channelled into the financing of politics…Bersatu is doing exactly what Umno did, using the same system, playing the same patronage games. They are using this to reach down to the grassroots and they are giving directorship to people who lost (the election) to keep them loyal to the party," (E.T.Gomez in "GLC Monitor - The State of Play since GE14" IDEAS report).

Under Mahathir, the Rural and Regional Development Ministry now controls five state development statutory bodies, Mara and a long list of other GLCs. These have gone against PH's manifesto promise to end such political appointments. There has also been a slew of changes at Felda, FGV, Lembaga Tabung Angkatan Tentera and Tabung Haji, with extensive shifts and moves at the top, replaced by those considered sympathetic and aligned to Mahathir.

Harapan had pledged in their GE14 manifesto that politicians would not be appointed as directors of government enterprises. Furthermore, at the Sept 1, 2018 Congress on the ‘Future of Bumiputeras and the Nation’, Mahathir stressed the need to reinstitute the practice of “selective patronage”, targeting bumiputeras.

Since Mahathir has taken charge, Khazanah has divested its 16% stake in IHH Healthcare to Mitsui & Co for RM8.42 billion in November last year, among other sales, showing that the “Look East Policy” is not just about emulating touchy-feely Japanese attitudes but also about Japanese yen for Malaysian investments.

Mahathir defended the sales, saying they were needed to raise funds in a bid to clear debts incurred by the previous government, a very convenient way to justify the privatisation sales.

The on-going negotiations to sell PLUS, the highway toll concessionaire owned by Malaysian taxpayers (Khazanah 51% & EPF 49%) are being carried out in a non-transparent manner. Why indeed should such a public-owned cash cow be privatised in the first place?

Mahathir’s close allies are doing rather well in the latest sales of assets and acquisitions. Umno has sold its 11.09% stake in Media Prima Bhd, the country’s largest media group, to tycoon Tan Sri Syed Mokhtar Al-Bukhary, who already owns equity interest in Utusan Melayu Bhd and The Malaysian Reserve.

The most aware and proactive countries in the world have declared climate emergencies in their own countries to commit to implementing immediate measures to survive the climate crisis that is enveloping our planet. Time is fast running out. There is growing consensus among climate scientists that we have no more than 18 months to ensure that global emissions of carbon dioxide peak by 2020 to keep global temperatures within the safe limit. The Intergovernmental Panel on Climate Change reported that to keep the rise in global temperatures below 1.5ºC this century, carbon emissions will have to be cut by 45% by 2030.

Countries all over the world are experiencing the tragic consequences of climate change, more recently the fires in California and Australia, the flood in Venice. In Malaysia, floods and landslides will be more severe and we have been warned that many coastal areas of Malaysia will be deluged in just a few years.

Even before this climate crisis, at least since the 80s we have been warning the government against the folly of deforestation, degradation of the environment especially our rivers, the emphasis on cars and highways to the neglect of public transport, the unsustainability of our farming methods.

There are reported to be at least 25,000 sites that are prone to landslides throughout the country and according to the 2017 Malaysian Environmental Quality Report, in terms of biological oxygen demand (BOD), none of the monitored rivers has been categorised as clean in 2017. In December 2018, Energy, Science, Technology, Environment and Climate Change Deputy Minister, Isnaraissah Munirah Majilis, told Parliament today that the country has 51 ailing rivers.

This year has seen fatal landslides at Tanjung Bungah, with migrants being the usual victims because developers have failed to provide proper housing for them. The people at Pasir Gudang in Johore have suffered through the toxic air pollution in Pasir Gudang which resulted in schools closing.

Twelve Orang Asli died in the jungles of Kuala Koh, Gua Musang in an area where the water source is suspected to be contaminated by mining activities. Meanwhile, the water supply in Selangor continues to be periodically disrupted through leakage of pollutants into the river sources by illegal factories in the vicinity of the rivers. In Sabah, the indigenous people there have demonstrated against the building of the Papar dam which threatens to displace them from their ancestral land.

Politicians in this country appear to be in the pockets of the developers. We are told that RM8.3 billion worth of high-rise units remain unsold and the government has lowered the foreign-ownership threshold further. So why isn’t there any regulation of the building of luxury units? The Pakatan government has promised one million affordable houses within two terms, housing loans for the youth, increasing developer quotas for affordable houses while developers regularly advertise more luxury houses.

And while the country is supposed to be suffering from a trillion-ringgit debt crisis, the Penang government seems intent on going ahead with the RM46 billion Penang Transport Master Plan (PTMP). With the impending climate crisis, the fragility of Penang’s coastal environment and the livelihood of fishermen there, the wisdom of the RM70 billion land reclamation project is highly questionable.

The PTMP includes LRT, Monorail, BRT (bus rapid transit), highways as well as an undersea tunnel linking the island with the mainland plus the land reclamation for three man-made islands. Meanwhile, the PTMP website is short on timelines, costs, feasibility reports or environmental impact assessments (EIA). All this information on the multi-billion projects must be made public and debated before the projects can go ahead.

Most important of all, we have called for the protection of the Native Customary Rights of our indigenous peoples, especially their traditional land.

We therefore call on the government to declare a climate emergency and to implement these measures immediately: ban single-use plastics and the import of plastic waste immediately; make manufacturers commit to waste reduction targets and replace fossil fuels with clean renewable energy; increase the total electricity supply output from renewable sources to at least 25% by 2025 as in other countries in the region; improve and expand public transport systems in the country; no more highway projects through environmentally-sensitive areas; clean up all rivers especially water catchment areas in the country and clear all illegal factories from the buffer zone of all rivers and water catchments; stop the building of mega dams such as Papar dam in Sabah which destroy the environment and the traditional land of our indigenous peoples; gazette all our forests and stop all logging of our rainforests for buildings, plantations and other infrastructure projects which are vital water catchment areas; regazette all forests that have been degazetted; regulate the use of pesticides and herbicides by all farmers and especially their seepage into the river systems in the country; educate farmers regarding the unsustainability of livestock and poultry farming if we are to solve the climate crisis.

Suaram therefore calls on the government to address these critical crises facing the nation if it is serious about a “Shared Prosperity Vision”.

KUA KIA SOONG is Suaram adviser. The above is his speech at the launch of Suaram's Human Rights Overview Report 2019 in Kuala Lumpur yesterday.