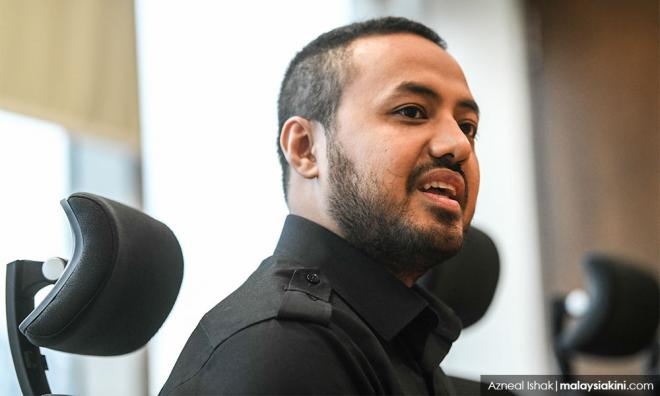 PKR president Anwar Ibrahim's political aide launched a broadside against the party's number two Azmin Ali and those aligned to him.

Referring to them as the “cartel”, Farhash Wafa Salvador Rizal Mubarak (above) chided them for not airing their grouses at the PKR congress but choosing to do so in the media during last night's dinner at the Renaissance Hotel in Kuala Lumpur instead.

“The congress had a stage for the leaders and grassroots to voice out. But running away to do a media conference midway (of the congress) is not gentlemanly.

“If we refer to the dictionary, the term “cartel” is negative. Enough of ranting in the media. Come to the (party) meetings, cheaper than doing it at home or hotels,” he added in a statement this evening.

This was in reference to Azmin and leaders aligned to him being absent from party meetings.

At the dinner last night, Azmin recounted how he and other leaders had gathered at the same venue two decades ago to mark the founding of PKR.

Azmin was commenting on Anwar's speech at the congress on Saturday where the latter cited a tale of treachery from Malacca's history.

The folklore had led to a walkout from Azmin's supporters from the congress.

Meanwhile, PKR vice-president Zuraida Kamaruddin, who is one of Azmin's staunchest allies, told those who attended the dinner that both of them are prepared to be sacked from the party.

Apart from this, Zuraida (above, right) alleged that Anwar attempted to convince her that it was Azmin in the sex video, which made headlines in June.

According to Zuraida, Anwar's judgement was impaired due to the influence of a “novice” and a “mafia”, which was seen as referring to PKR communications director Fahmi Fadzil and Farhash.

Zuraida, who is the housing and local government minister, also commented on Farhash wearing a black shirt and songkok to the congress.

“Blocked by gangsters, blocked by liars. If they call us “cartel”, what should I call them over there? Mafia? First-class mafia,” she said.

Commenting on this, Farshah asked if it is wrong for people to be fond of wearing black.

Azmin also took a veiled dig at Farhash, stating that one such new leader was someone "whose name does not even sound Malaysian".

Responding to this, Farhash took a veiled dig at leaders being born in Singapore.

While he did not mention names, Farhash appeared to be referring to Azmin and his key ally Zuraida. While they were born in Singapore, both are Malaysian citizens and long-time reformasi activists.

"Malaysia is a multiracial country and it is not unusual for there to be strange names, particularly since I am mixed-blood. But I am born in Ipoh, Perak, not Singapore," he said.