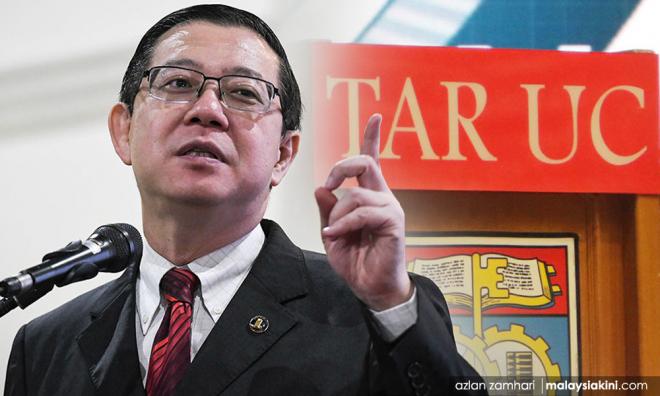 COMMENT | The Tunku Abdul Rahman University College (TAR UC) issue has now become the interest of national debate with many versions and much spin surrounding the funding - or rather the renouncement of funding - for this institution which had been established way back on Feb 24, 1969 as a non-profit, private university college in Malaysia.

One must be familiar with history to comprehend that TAR UC was founded by MCA on the purest intentions solely to provide accessible and affordable tertiary education to lower-income Chinese Malaysian families, who fell outside of the quota system to get into the local public universities but could not afford to send their children overseas.

Currently, the hottest issue plaguing this prestigious institution is that TAR UC sits on an astounding cash reserve valued at about RM634 million and MCA is making hay by asking for government grants and public donations.

At the party’s annual general meeting on Nov 30, TAR UC board of governors chairperson Liow Tiong Lai held a special briefing to lay bare the TAR UC issue, and address all allegations including the cash reserves and its ownership.

Let me address the cash reserve issue. Yes, TAR UC has a healthy cash reserve but this was built up through 50 years of prudent management and investment by the TAR UC Education Foundation board of trustees and the TAR UC board of governors of TAR UC.

Since the 1970s, TAR UC started an annual building fundraising to seek money for buildings and campus expansions, and these public donations - including from eminent philanthropists - were carefully safeguarded and invested by TAR UC to grow its “nest eggs” that together with prudent management, created a healthy RM634 million cash reserve today.

So what if TAR UC has hundreds of millions in cash? How many universities in Malaysia, public and private, can boast of such a fine management that created such a healthy state of finance? And it must be impressed upon that this healthy reserve was preserved, and enhanced, while TAR UC consistently maintained affordable education for all.

To borrow AirAsia's tagline, TAR UC embodies the tagline "Now Everyone Can Get Higher Education".

With commendable foresight, the TAR UC management built on this cash reserve over the past 50 years with the objective of using this fund for expansion. This would be the funds that TAR UC would dip into when it needs to add new buildings to expand the capacity of TAR UC campuses or even build new campuses.

TAR UC needs the flexibility to have the financial capacity to expand whenever the need arises and not have to withhold expansion plans when the time comes.

And let us all common Malaysians not forget that TAR UC is a private institution and unlike other public universities, it does not have the luxury of government hand outs or assistance when it comes to expansions and ‘upgrading’.

As a private institution and one that is still in its quest to become a full-fledged world class research university, it has much to upgrade not only in terms of hardware (buildings/facilities/equipment) and also its software (human capital). Needless to say, all of this cost money. A lot of money.

In fact, this RM634 million reserve pales in comparison to the amount required to develop a blue-blood prestigious research university, like the US Massachusetts Institute of Technology (MIT), that TAR UC aspires to become. To attract world class researchers and fund frontline groundbreaking research, TAR UC must have money.

Additionally, this cash reserve ensures TAR UC’s ability to continue as a business entity even under adverse conditions. As TAR UC board of trustees member Lau Yin Pin puts it, the management needs over RM100 million a year to pay staff salaries alone at the university.

TAR UC’s operating expenditure has been increasing exponentially annually, rising from RM140.3 million in 2013 to RM232 million in 2018.

In fact, TAR UC is much more heavily scrutinised by government agencies and ministries than any other university in Malaysia.

What’s more, its accounts are audited to international accounting standards annually and submitted to CCM without fail.

Gov't reps sit in TAR UC board too

Somehow, ignorance seems to prevail and there is much false perception that MCA can dip into the TAR UC Education Foundation’s fund whenever it needs.

This is mere political spin as the foundation’s money can only be used by TAR UC for its operational and developmental needs. This money cannot be, say distributed among all MCA members, even if the TAR UC board of governors decides to close down TAR UC.

Under the TAR UC charter, the institution may only be transferred to another party approved by government, and specifically approved by the Inland Revenue Board.

It is highly unusual that TAR UC is now subject to so much political scrutiny when it had been so strictly regulated, and even more so now with the change in the administrative regime.

For those unacquainted, the TAR UC’s 14-member board of governors includes the five representatives from the government, specifically from the Finance Ministry and Education Ministry serving as watchdogs in the interest of the government.

Apart from these five government appointees within the board of governors, which see to the day-to-day operations and management of the institution, there are also two other independent members within this board, namely the president of the Federation of the TARC Alumni Associations, and the president of the Tarcian Alumni Association (TAA), serving as watchdogs in the interest of the institution.

Let me highlight here that the TAA representative is none other than Yap Kuok Fong, whose NGO was given a RM40 million allocation by the government for political reasons.

Given this eminent panel of custodians, if at all there was any mismanagement or any failure in the duty of its members to exercise prudent discretion in all its decisions and undertakings when it comes to TAR UC’s operations, as well as in the expenditure of the hotly contentious matching grant received from the government annually, then I am certain everyone of this 14-member board would have been taken to task — including Yap and those from the ministries.

Therefore, if there was any issue with TAR UC’s management for the past 50 years, these government representatives would have highlighted it.

Yet, when TAR UC continued to receive its matching grant under the previous government, there was no undue concern or objection from the government representatives. Furthermore, it is rather exemplary how financially meticulous the board of governor members were in the past years, so much so that TAR UC managed to accrue a nest egg for impending future expansions.

So let’s all stop denying the fact, that yes, MCA with its great foresight founded TAR UC for the lower-income Malaysians, and yes, MCA was also astute and shrewd enough to place the running and management of TAR UC into the hands of professionals, building it up from that one red brick into an academically prestigious and highly acclaimed tertiary institution it is today.

Yes, indeed TAR UC has come a long way from being a mere college with classrooms borrowed from other schools, growing into a prestigious university college that today boasts five campuses dotting the country, including Sabah.

It is rather disheartening how this matching grant has now become a political pawn in Finance Minister Lim Guan Eng’s personal quest to get one up on MCA.

And to browbeat the matter further, the government or rather Lim has now reportedly provided RM40 million to TAR UC through TAA, conditioned on MCA “letting go” of TAR UC.

What is the distinction between the government “matching grant” and Lim's recent RM40 million allocation to TAA? Money is money, you may say.

Let me explain why the RM40 million allocation is not the same as matching grant.

Originally, the TAR College’s matching grant was stated in a special instrument of government presented by the then Education Minister Hussein Onn to parliament on Aug 22, 1972, to commit the government’s “dollar for dollar” support for TAR College to realise and deliver affordable education to all Malaysians.

When TAR College was upgraded to a university college in 2013, the cabinet committed to give the institution up to a maximum of RM60 million as endorsed by the federal government via its cabinet meeting on Dec 5, 2012, and the special instrument presented in 1972 was revoked thereafter.

Therefore, TAR UC’s subsequent matching grant is a legally binding contract by the government to aid the institution directly.

For the past five decades, TAR UC had received RM1.353 billion in total grants, the last being a RM30 million allocation provided under the 2018 budget but the matching grant was subsequently withheld by Lim when the new government took over Putrajaya.

Since then, Lim as finance minister has played political football with the lives of 28,000 students nationwide by totally cutting off grants for operational expenditure and slashing development expenditure to RM5.5 million under Budget 2019, and to RM1 million in Budget 2020.

By law, any financial aid to TAR UC – whether in the form of a matching grant or even allocation – must be given directly to TAR UC and not through a third party even if the latter was established as a foundation for the welfare of TAR UC.

The government, above all, should not be seen as making a “backdoor reverse takeover” of TAR UC through an NGO or foundation because it cannot use the TAR UC name, acronym, or logo, which are the registered trademarks of its owners.

It is wrong for the government to portray its new foundation as representative of TAR UC to take over the role of its legal owners, more so when the owners had registered their trademark. Where is the government’s respect for trademarks? And by its current action, it had sowed confusion among the people as well.

TAR UC is accountable for every sen of matching grant that it receives directly from the government, which will be reflected in its accounts.

Even if TAR UC receives the RM40 million from TAA, the accounting treatment now would reflect an NGO donation for which the TAR Education Foundation may issue a tax-exemption receipt. But whether or not TAA will make this donation to TAR UC remains to be seen, hence the public must vigilantly hold TAA and Lim accountable for this RM40 million out-of-budget allocation from taxpayers.

The distortion and melodramatisation of the whole TAR UC palaver by the finance minister has somewhat irked the common people, so much so even common petty traders are now raising funds for TAR UC.

This dissent has somewhat translated into the dire defeat of the Pakatan Harapan government in the recent Tanjung Piai by-election.

The affordable and quality tertiary education provided by the prestigious TAR UC is undeniable. So why is Lim bending over backwards trying to fix something that is not broken?

As the former US House of Representative speaker Samuel Rayburn, used to say, “Any jackass can kick down a barn but it takes a good carpenter to build one”.

PAMELA YONG is the deputy chairperson of the Institute of Strategic Analysis and Policy Research (Insap).