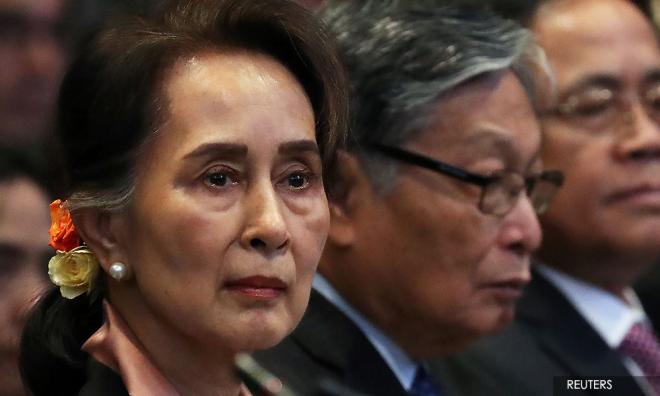 Mass rapes, the burning alive of Muslim Rohingya families in their homes and the killing with knives of dozens of children were described by Gambia's legal team as it set out its genocide case against Myanmar at the UN's highest court on Tuesday.

Myanmar's leader Aung San Suu Kyi, a Nobel Peace laureate, looked on impassively as the alleged atrocities were detailed on the first of three days of hearings at the International Court of Justice in The Hague. The case was instituted by Gambia against Buddhist-majority Myanmar in November.

"All that Gambia asks is that you tell Myanmar to stop these senseless killings," Gambia's Justice Minister Abubacarr Tambadou said in opening comments.

"To stop these acts of barbarity and brutality that have shocked and continue to shock our collective conscience. To stop this genocide of its own people."

Suu Kyi is expected on Wednesday to repeat denials of genocide and argue that military "clearance operations" launched in August 2017 were a legitimate counterterrorism response to attacks by Rohingya militants.

Detailing events at the village of Min Gyi, Gambia's lawyer Andrew Loewenstein drew on witness accounts recorded in a report by UN investigators, who estimated 750 people were killed there, including more than 100 children under the age of 6.

"There were dead bodies on the floor: young boys from our village," Loewenstein quoted from one survivor's testimony to the UN fact-finding mission.

"As we entered the house, the soldiers locked the door. One soldier raped me. He stabbed me in the back of my neck and in my abdomen. I was trying to save my baby, who was only 28 days old, but they threw him on the ground and he died."

At the end of Tuesday's hearing, Gambia asked the court to order special measures to protect the Rohingya. The so-called provisional measures would act as a kind of restraining order for the Myanmar military until the case is heard in full.

"Only in this way can we hope the rights of Gambia and the safety of the Rohingya group be fully protected," said Philippe Sands, another lawyer for the tiny, mostly Muslim West African country.

More than 730,000 Rohingya fled Myanmar after the military-led crackdown and were forced into squalid camps across the border in Bangladesh. The UN investigators concluded the military campaign was executed with "genocidal intent".

Myanmar has previously denied almost all allegations made by refugees against its troops, including of mass rape, killings and arson, and promised to punish any soldiers involved in what it says were isolated cases of wrongdoing.

Outside the court, dozens of Rohingya demonstrated to demand justice for victims. Hours earlier in Yangon, Myanmar's commercial capital, thousands of people had rallied in support of Suu Kyi.

"It's like Mother Suu went to the frontlines for our country," said 58-year-old Myint Myint Thwin. "Therefore to show our support and that we stand with her we joined this march."

Once feted in the West, Suu Kyi has faced mounting international criticism over the Rohingya crisis. But she has remained popular at home since coming to power 2016 as part of the transition to democracy after decades of military rule.

Gambia is arguing that Myanmar's forces carried out widespread and systematic atrocities that constituted genocide, and that in doing so Myanmar violated its obligations under the 1948 Genocide Convention.

This week's proceedings, before a panel of 17 judges, will not deal with whether Myanmar is guilty of the most serious international crime but will focus on Gambia's request for provisional measures. A decision on that request is expected within weeks.

The tribunal has no enforcement powers, but its rulings are final and have significant legal weight.

In the Bangladeshi refugee camps on Tuesday, hundreds gathered on a hilltop and chanted, "Gambia! Gambia!", pumping their fists. Some offered special prayers at mosques in the camps and many others were fasting.

"Our people were killed, our children were thrown into fire, our women were raped, our houses were burnt down. All we want is a fair trial," said Nurul Amin, 30.