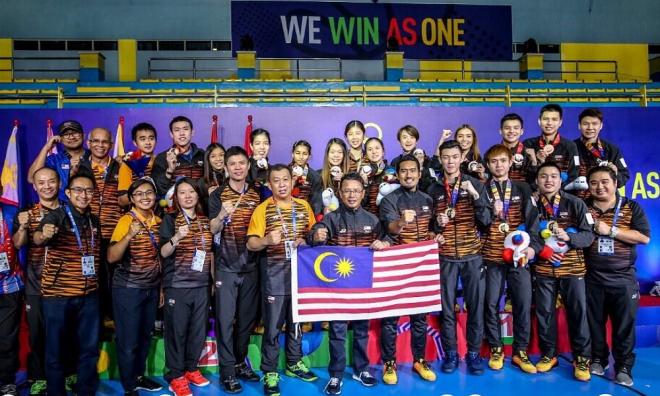 Malaysia ended their campaign in the 30th Sea Games in the Philippines with a total haul of 55 gold medals, far short of the 70 gold medal target set by the contingent.

Despite their best efforts, the contingent picked up only four gold medals on the final day of competition yesterday, which saw Malaysia wrapping their campaign in the fifth position on the overall medal standings with 55 gold, 58 silver and 71 bronze.

The total gold haul, however, does not include the gold medal supposedly won by national gymnast Izzah Amzan in the ribbon event on Dec 7, and later revoked by the Philippines SEA Games Organising Committee (PHISGOC).

Malaysia had filed a formal protest for the medal to be reinstated and up to press time yesterday, was awaiting a decision from PHISGOC.

Malaysia’s medal haul was way below the overall target of 70 gold, 51 silver and 105 bronze announced by Youth and Sports Minister, Syed Saddiq Syed Abdul Rahman at the SEA Games contingent final gathering on Nov 21, before they flew out to the Philippines.

The failure to meet the 70 gold target is mostly blamed on the disappointing performances of several national athletes, some of whom are of Olympic standards.

In the final day of action yesterday, the national athletics team delivered two gold through Muhammad Hakimi Ismail and Muhammad Irfan Shamsuddin () in the triple jump and discus events respectively.

Muhammad Hakimi lived up to his Southeast Asia triple jump king tag by winning his third straight SEA Games gold with a distance of 16.68 metres, while Muhammad Irfan retained the gold medal he had won since the 2013 edition in Myanmar, his fourth, with a distance of 57.29 metres.

Both the men’s and women’s indoor hockey squads completed the four gold haul for the day after beating their opponents from Thailand in the finals played at the LB Centro Mall and Convention Center, in Manila.

The 2019 SEA Games curtains will officially fall today with the closing ceremony at the New Clark City Athletics Stadium, to be officiated by Philippine President Rodrigo Duterte.

The Malaysian contingent is represented by 773 athletes, competing in 52 out 56 sports in three clusters - Manila, Clark and Subic - and 339 officials.

Vietnam will host the next SEA Games in 2021.