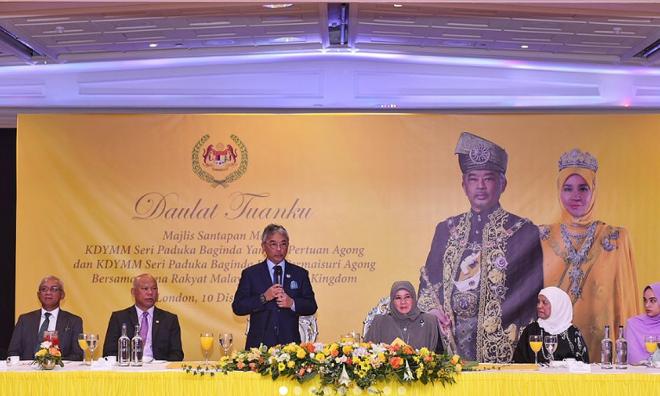 Both Their Majesties also spent time shaking hands and having friendly chats with the audience.

During the three-hour event, Al-Sultan Abdullah, in his speech, expressed his hope that bilateral relations between Malaysia and the UK would continue to expand in the future.

He said Malaysia and the UK have long-established relations and both countries practice the system of constitutional monarchy.

Al-Sultan Abdullah also reminded Malaysians in the UK to be good citizens and to maintain the good name of the country.

There are about 75,000 Malaysians living and working in the UK, including 19,000 students studying at local universities.

Also present at the dinner was Malaysian High Commissioner to the UK Datuk Mohamad Sadik Kethergany.

During the special visit, Their Majesties are also scheduled to attend a luncheon to be hosted by Queen Elizabeth II at the Buckingham Palace tomorrow.

This special visit to the UK is the Agong's fourth after the United Arab Emirates, Saudi Arabia and Japan in June, July and October, respectively, since being sworn in as the 16th Yang di-Pertuan Agong in January.