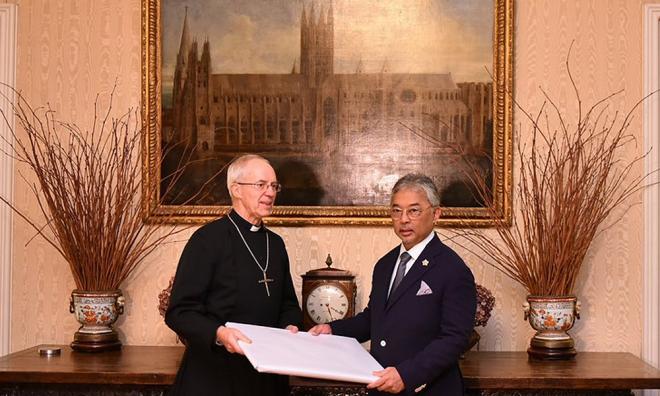 The half-an-hour meeting was to exchange views on the multi-cultural and multi-religious society in Malaysia and the United Kingdom.

Sultan Abdullah was then given a tour inside the palace including the Great Hall, which is part of the Lambeth Palace Library and the Guard Room, where soldiers gathered and stored their weapons during the time when the Archbishop had his own private army.

The Archbishop of Canterbury is the principal leader of the Church of England.

The Lambeth Palace Library houses the largest collection of Christian books outside of the Vatican.

The Yang di-Pertuan Agong and Raja Permaisuri Agong Tunku Azizah Aminah Maimunah Iskandariah are currently in the UK on a special visit till Dec 16.

Their Majesties are scheduled to attend a luncheon to be hosted by Queen Elizabeth II at the Buckingham Palace today.

This special visit to the UK is Sultan Abdullah’s fourth after the United Arab Emirates, Saudi Arabia and Japan in June, July and October, respectively, since being sworn in as the 16th Yang di-Pertuan Agong in January.