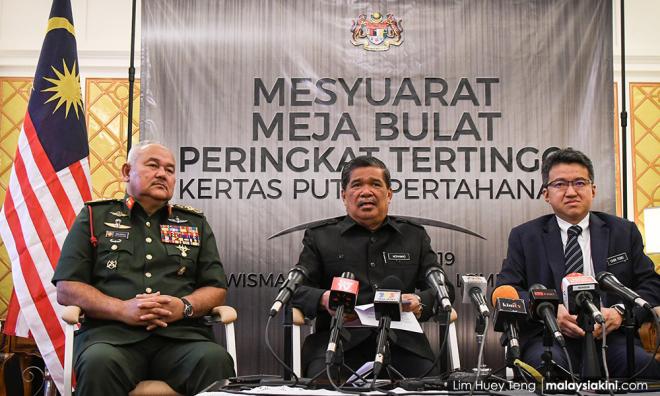 Defence White Paper: Devil is in the procurement

COMMENT | Suaram is happy to see the tabling of Malaysia’s first Defence White Paper (DWP) nearly ten years after we called for one in our 2010 publication "Questioning Arms Spending in Malaysia: From Altantuya to Zikorsky".

As the complainant in the French courts regarding the RM7 billion Scorpene submarines scandal and the whistleblower over the RM5 billion arms deal-linked to the Pergau dam scandal in the early 90s, Suaram is especially concerned about multi-billion arms procurements at a time when we face a trillion-ringgit national debt.

It must be pointed out that although Najib Razak was the defence minister at the time, these major scandals happened under the watch of Prime Minister Dr Mahathir Mohamad.

In the national defence strategy for the period 2021 until 2030, Defence Minister Mohamad Sabu says Malaysia faces territorial disputes involving US-China rivalry and non-traditional threats across its borders including jihadist fighters, the Rohingya crisis and cyberterrorism, requiring the country to take pre-emptive measures.

In August, Mohamad told Reuters that China had "not done anything that caused us (Malaysia) trouble, so far" despite encroaching into its waters, adding that Malaysia regularly tracked Chinese naval and coastguard vessels entering Malaysia's territorial waters.

Malaysia's criticisms of China's claims over the South China Sea have receded somewhat after China pumped billions of dollars into infrastructure projects in Malaysia under its "Belt and Road" initiative.

The minister said defence initiatives under the White Paper would need an annual allocation of at least one percent of the country's gross domestic product.

Malaysia has said that it needs to boost its naval capabilities to prepare for possible conflict in the South China Sea between the two major powers, but Mohamad said his ministry could not reveal the figure and assets it plans to procure.

Addressing concerns about the lack of funding details in the White Paper, the defence minister said in his winding-up speech that the document had to be viewed in tandem with others such as the 12th and 13th Malaysia Plans – which are economic policy papers for the periods 2021-2025 and 2026-2030.

The devil is in the details on how the government plans to fund programmes and assets procurement. The minister said 6.5 percent of the annual budget is needed to implement the DWP and that three special committees will be set up, involving the Defence Investment Committee, which will be chaired by Mahathir; Policy Committee chaired by Mohamad; and the Reformation and Implementation Committee, which will be chaired by ministry secretary-general Mohd Zuki Mohd Ali and Armed Forces chief Gen Zulkifli Zainal Abidin.

The Malaysian Navy is reported to be in the final stages of negotiations with French shipbuilder DCNS to build the larger littoral combat ships (LCS), three new multi-role support ships (MRSS) and two more submarines. Knowing the bill for the two Scorpene submarines was more than RM7 billion, taxpayers should be prepared for the worst.

So, exactly how are decisions made in the Ministry of Defence to purchase the submarines, the corvettes, the frigates instead of more patrol boats to guard our coastlines?

The prime minister has since said, “I think there should not be too many warships. Warships create tension. Keep out the warships and instead have joint small-boat patrols for maintaining peace in the disputed and resource-rich South China Sea… someday, somebody might make some mistakes and there will be a fight, some ships will be lost, and there might be a war. We don’t want that.”

Can Malaysia afford fighter jets? The key question the defence minister needs to ask is whether Malaysia actually needs any of these fabulous toys, considering the cost of fighter jets is spiralling way out of control and such “toys” are so quickly obsolete?

One of the rare moments we got to use our F18 fighter bombers and Hawk 208 fighter jets was against invaders described by then defence minister Hishammuddin Hussein as a “rag-tag army” at Lahad Datu a few years ago. Wouldn’t armoured cars and mortars have sufficed in that 4sq km area of land against that motley crew?

Taxpayers deserve answers to these key questions - Are multi-role combat aircraft our priority at the moment considering the latest state-of-the-art (US) F35s cost at least half a billion ringgit a piece?

Malaysians need to be reminded that with RM10 billion, we can build at least 10,000 rural schools or 1,000 district hospitals. Note that we only have just over 1,000 Chinese primary schools and just over 500 Tamil schools in the whole country, while there are more than 1,000 dilapidated schools in Sarawak.

The outgoing defence minister said the ministry was planning to replace the Royal Malaysian Air Force’s (RMAF) squadron of Russian MiG-29 combat planes, nearly half of which are grounded. The new defence minister must investigate why nearly half these MiGs are grounded and call for a report on the relative performances of our MiGs, Sukhois, Hawks and F18s purchased in recent years.

Can we also have an audit report on the compatibility of our bizarrely diverse Russian, British, US (and now French?) fighter jets and especially the compatibility of their avionic systems? What lessons have our past purchase choices hold for our future fighter jet procurements? These are the questions the new defence minister must pose to our Air Force chiefs. They are important considerations for forging our defence policy.

Malaysia is expected to invite bids for a multibillion-dollar acquisition of up to 36 light combat aircraft early next year, according to reports. In response, the minister said Malaysia will release a separate document outlining its procurement priorities, although he gave a timeline. He also said he will call for an increase in the defence budget, although Finance Minister Lim Guan Eng has since clarified that any increase will be dependent on how the country’s economy performs.

Considering Pakatan Harapan made such a big deal out of the national debt to garner sympathy for failed promises, they will be hard pushed to justify a big-budget defence spending at all.

Mahathir on Sept 28 also said Malaysia was too small to stand up to the Asian powerhouse so it only makes sense that our defence strategy should be considered in tandem with all Asean countries just as the European Union has done.

We observe that during times of economic recession (and we know that one is looming), the government has no choice but to implement cuts in defence spending. During such times, all the previous justifications for buying more and more sophisticated defence equipment are quietly forgotten. Thus, when the Malaysian economy slowed down in 1980-81 and annual growth rates for 1981-85 were well below the 7 percent growth rates enjoyed in the 1970s; all sectors including defence had to be cut back.

After the huge increase in armaments procurement in the late 1970s justified by the Vietnamese threat, the prime minister rationalised the cuts by saying that Vietnam was not a threat to Malaysia’s national security after all. During the mid-eighties economic recession, Malaysia’s defence budget was cut from US$2.7 billion in 1982 to US$216 million in 1986.

The financial crisis toward the end of the 1990s gave us a vision of a region without an arms race. It was not because political leaders had suddenly come to their senses, but simply that countries in the region could no longer afford expensive military equipment.

Indonesia announced in 1998 that it would cut military spending by up to US$20 billion. During the financial crisis of 1997, the Malaysian Defence Ministry was forced to reduce its budget under the Seventh Malaysia Plan to RM3 billion, making a saving of more than RM400 million.

What does Asean’s aim to create a zone of peace, freedom and neutrality mean? It is meaningless unless the countries in the Southeast Asian association prove their sincerity by implementing arms control so that badly needed resources can be diverted to improving the standard of living of Asean peoples. This must be the top priority of Asean countries if they are serious about pooling resources to cut down on wasteful arms spending and to become an economic power bloc.

Multilateral efforts and joint prevention measures are the means to overcome these threats, for example, MAF’s joint operations with Indonesia and Singapore on naval and aerial patrols to curb piracy in the Straits of Malacca; Malaysia and Thailand’s efforts in the 1990s set a good example of peaceful resolution by jointly fishing in a once disputed maritime zone in the Gulf of Thailand.

The defence minister has said in line with the Malaysia New Foreign Policy Framework, the DWP rejects the use of force in resolving all conflicts but preferred a peaceful approach.

The UN General Assembly established a register for arms transfers in December 1991. To start with, Asean countries can abide by this practice for the region by being transparent about their arms holdings and acquisitions and thinking about the security of the region as a whole.

An obligatory Asean register of conventional arms would be a good first step toward increased transparency in exposing the armaments of each Asean country.

However, the register will need to be expanded to ensure that each country provides greater detail about their arms procurements and that these have to be cross-checked with other sources. Beyond imports and exports, the register should include each country’s capabilities, inventories and production levels.

Regional disputes can be resolved through adopting co-operative management to allow safe fishing, while oil and gas exploration beyond 200 nautical miles from mainland coasts can be regulated by the International Seabed Authority, as provided by the Law of the Sea Convention.

The resolution of the Pedra Bianca dispute between Malaysia and Singapore through international intervention showed that peaceful negotiations are always possible and that military means are not an option.

In 2012, Transparency International found that two-thirds of parliaments and legislatures around the world failed to exercise sufficient control over their Ministry of Defence and the armed forces, and 70 percent of these largest arms importers left the door open to corruption.

Malaysia had a score of 25.14 out of 100 percent in a six-band rank which ranked “Very High” risk of corruption amongst 21 other countries.

Parliamentarians should push for greater transparency in arms procurements and seriously debate the defence budget and monitor the procurement process to prevent the repetition of the scandals of the past.

There should be special select committees to scrutinise any big-budget procurements. Malaysians do not want to hear any more about the devils involved in arms procurement corruption.