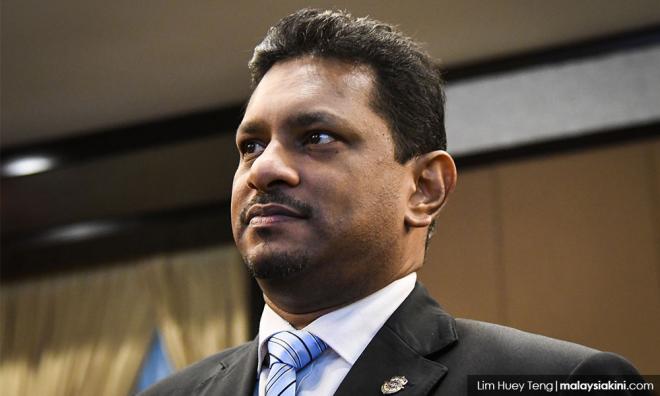 Malaysian Bar president Abdul Fareed Abdul Gafoor has reminded the Pakatan Harapan government to remain faithful to its 14th general election manifesto promises on human rights and to implement them without delay.

"Over the past 12 months, we have seen the Harapan government both renege and deliver on various promised human rights reforms," Abdul Gafoor (above) said.

"Promise 26 of the election manifesto that pledges to “make our human rights record respected by the world” has been severely challenged," he said in a statement today in conjunction with World Human Rights Day which fell on Tuesday.

"This government had also pledged, in Promise 27 of the election manifesto, to 'abolish oppressive laws'. In this respect, none of the laws detailed therein has been repealed, or even attempted to be repealed.

"They remain in our statute books," he added.

Abdul Fareed cited the recent use of the Security Offences (Special Measures) Act 2012 (Sosma) against 12 individuals allegedly linked to the Liberation Tigers of Tamil Eelam (LTTE).

"These persons were arrested, detained, and denied bail under Sosma, and were only charged nearly two weeks later. Since then, the government has stated that it will consider removing certain draconian provisions from Sosma."

Abdul Fareed said the government could not continue to effect reforms in this way.

"The Malaysian Bar hopes that the commitment by (de facto law minister) Liew Vui Kiong (above) will manifest not only in stronger political will but should also signal less abuse by the Executive.

"We note that Liew is reported to have addressed freedom of information legislation, alternative sentencing to replace the mandatory death penalty, the establishment of a Law Commission and Ombudsmen Malaysia, the decriminalising of drug addiction, and that cabinet had approved the development of a National Action Plan on Business and Human Rights for Malaysia."

"These are all welcomed," added Abdul Fareed.

He also lauded the government for opening up democratic space and taking a less severe attitude towards censorship.

"This season of Malaysia’s growth and development as a nation is distinguished from previous seasons, as we now have a reference text from which we are able to hold the Harapan government accountable - the election manifesto.

Abdul Fareed lauded the government's attempt to revoke the Anti-Fake News Act 2018, but said he was concerned its U-turn on acceding to the International Convention on the Elimination of All Forms of Racial Discrimination (Icerd) and the withdrawal of its decision to accede to the Rome Statute of the International Criminal Court.

"The acceptance and incorporation of international norms and standards as set out in these conventions are necessary for establishing universal baselines for human rights.

"The Malaysian Bar therefore also calls on the government to accede to the United Nations Convention against Torture and Other Cruel, Inhuman or Degrading Treatment or Punishment (Uncat), as pledged, without further delay."

Abdul Fareed added that in the coming year 2020, it is pertinent to remind ourselves that protection of human rights, respect of human dignity and the rule of law are essential and indispensable to the growth of a democratic nation.