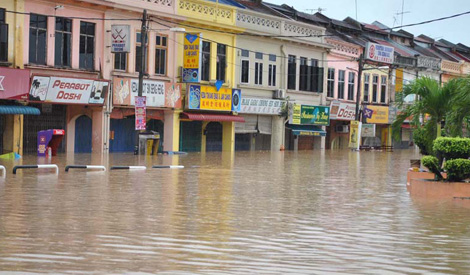 The flood situation in Rompin, Pahang, has taken a turn for the worse with 681 people from 176 families evacuated as of 7am this morning compared to 345 people from 92 families reported last night.

The Social Welfare Department Disaster Info Portal reported as of 7am, three more temporary evacuation centres (PPS) were opened last night, bringing the total number of PPS in the district to nine.

Rompin has been inundated with floodwaters since yesterday, with heavy rain since Friday causing several low-lying areas to be flooded.

“The water level at Sungai Pukin recorded a reading of 0.13 metres above the alert level at 44 metres while other rivers in the district are showing an upward trend, but still at normal levels,” he said.

Meanwhile, continuous heavy rain for the past two days have seen the number of flood victims in Johor increase dramatically with 3,835 people from 1,054 families were evacuated from their homes as of 8am today.

He added that heavy rain had also caused floods in Batu Pahat district, bringing the affected districts to seven.

However, the PPS Kampung Melayu Batu Empat Paloh community hall in Kluang was closed at 9 pm.

He said all the evacuees were currently housed in 52 PPS – 13 in Kota Tinggi, 10 in Mersing, 20 in Kluang, six in Segamat and one each in Kulai, Muar and Batu Pahat.

“The Mersing district recorded the highest number of evacuees at 1,262 from 352 families followed by Kota Tinggi with 1,071 people from 267 families,” he said in a statement today.