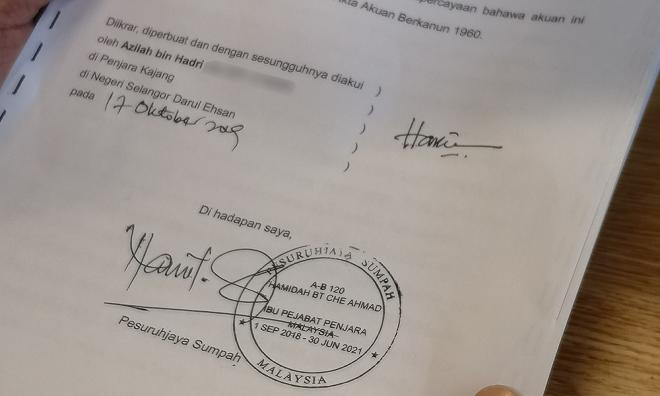 MP SPEAKS | The shocking sworn statement of the death row inmate and former commando Azilah Hadri justifies an inquiry into the whole process of investigation, prosecution and trial for the murder of Mongolian Altantuya Shaariibuu in October 2006.

In all my statements about the murder of Altantuya in the past 13 years, I have never accused former prime minister Najib Abdul Razak of her murder.

In my last statement on the issue on Oct 31 last year, I had said that “the ghost of Altantuya will continue to haunt Najib and Malaysia until there is a full and satisfactory investigation as to the motive for the heinous murder of the Mongolian and the real murderers brought to justice”.

I had said: “When the heinous murder and the mysterious disappearance of Saudi Arabian journalist, Jamal Khashoggi in the Saudi Arabian consulate in Istanbul hit the world headlines early this month, the first person I thought of was Altantuya Shaariibuu, who was murdered and whose remains destroyed with C4 explosives in Shah Alam on Oct 16, twelve years ago.

“The ghost of Altantuya will continue to haunt former prime minister Najib and Malaysia until there is a full and satisfactory investigation as to the motive for the heinous murder of the Mongolian and the real murderers brought to justice.

“Home Minister Muhyiddin Yassin told Parliament yesterday that the police will take appropriate action against Najib and his wife Rosmah Mansor if the couple is implicated in the murder of Altantuya.

“He was responding to Monday’s speech by the DAP's Bukit Gelugor MP Ramkarpal Singh in the debate on the Mid-Term Review of the 11th Malaysia Plan on the revelations made by businessperson Deepak Jaikishan on the Altantuya murder in a recent recording, which was uploaded online.

“Although Deepak’s video recording had since been deleted from the Internet, it should pose no difficulty for the police to locate the video, which is making the rounds on the social media in the last few days, and most important of all, the police can get confirmation from Deepak himself on the authenticity of the video.

“As Ramkarpal told Parliament on Monday, Deepak had clearly stated that Najib and Rosmah were involved in the murder of Altantuya.

“In fact, at stake is not just the reputation of Najib and Rosmah, but Malaysia’s international repute and standing as a developed and civilised society where the rule of law and justice prevail in the country, where people do not disappear for no rhyme or reason or got murdered for no motives.”

In my statement of Oct 14, 2018, I had given five reasons for the re-opening of investigations into Altantuya’s murder:

With the two additional reasons - Deepak’s video and Azilah’s sworn statement from the death row - does Najib support the re-opening of the investigation into the Altantuya murder to establish its motive, something which the former administration under him failed to do?