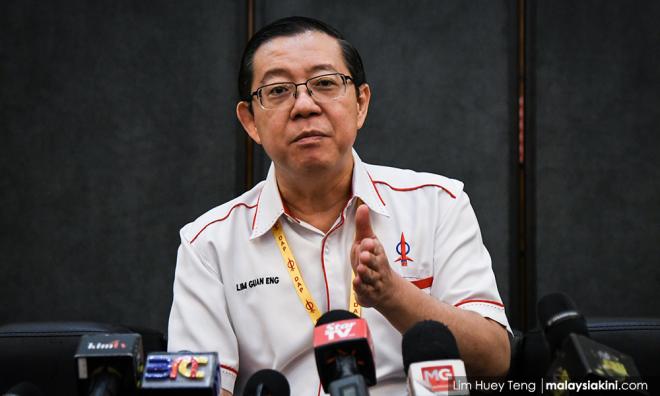 DAP has expressed its grave concerns at a court action that claims that the existence of vernacular schools is not legal because it is against the Federal Constitution.

"For the last 62 years since Merdeka in 1957, the existence of Chinese and Tamil schools have never been questioned and have received public funding.

"For the first time in history, a legal suit has been filed naming the Education Ministry and government of Malaysia as defendants, seeking a declaration that the existence of Chinese and Tamil vernacular schools contravenes Article 152(1) of the Federal Constitution.

"DAP views this as a dangerous development that can not only threaten the existence of Tamil and Chinese schools but also jeopardise national unity and harmony of our multi-racial society," said DAP secretary-general Lim Guan Eng (above) in a statement today.

He said DAP will defend vigorously the constitutional right of Chinese and Tamil schools to exist by bringing the matter up in the cabinet's final meeting for the year tomorrow and that the government must instruct the attorney-general to mount a strong opposition to the legal suit.

"At the same time, DAP will also seek to intervene legally in the suit on behalf of vernacular schools and has instructed the chairperson of DAP Legal Bureau and MP for Bukit Glugor, Ramkarpal Singh, to provide legal representation," he said.

The suit was filed today by lawyer Mohd Khairul Azam Abdul Aziz (below, in red headgear) seeking a declaration that Section 17 and 28 of the Education Act 1996, which permitted the use of Mandarin and Tamil as a medium of instruction at Chinese and Tamil schools respectively, were inconsistent with Article 152 of the Federal Constitution.

Article 152 of the Federal Constitution deals with Bahasa Malaysia being the national language of Malaysia provided that no person shall be prohibited from using, teaching, or learning other languages among others.

Also targeted by the legal action is Section 28 of the same act which states that subject to the provisions of the act, the education minister may establish national schools and national-type schools, and maintain such schools.

Khairul Azam's originating summons named the education minister and the government of Malaysia as defendants.

Khariul had on Oct 23 filed a motion at the Federal Court to challenge the legal validity of vernacular schools.

However, on Nov 11, the apex court dismissed his application to proceed with the legal challenge.

Lawyer files suit against use of Mandarin, Tamil as medium of instruction in schools
17 Dec 2019
New NGO to deal with 'withering' respect for Federal Constitution
17 Dec 2019
Guan Eng: If can learn Jawi in three pages, we are geniuses
15 Dec 2019
Haniff Khatri appointed lead counsel in renewed vernacular schools challenge
16 Dec 2019