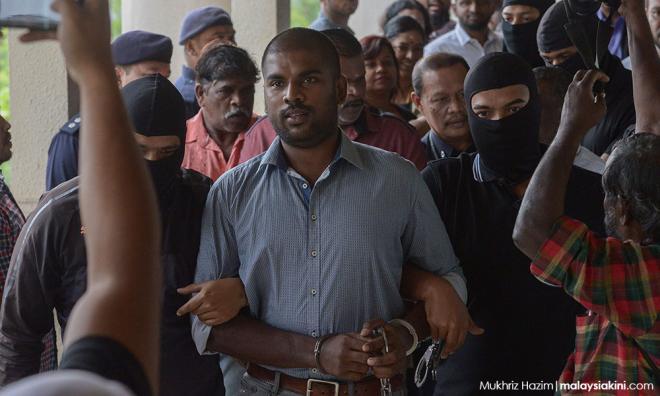 LTTE: Assemblyman among four who plead not guilty

Four men including a state assemblyman pleaded not guilty at two High Courts here today to charges relating to terrorist group the Liberation Tigers of Tamil Eelam (LTTE) in 2014 and 2019.

Seremban Jaya state assemblyman P Gunasekaren, 60; DAP member V Suresh Kumar, 43; businessman B Subramaniam, 57; and scrap metal trader A Kalaimughilan, 28, made the plea after the charges were read out to them separately in Tamil and Bahasa Melayu in front of judges Muhammad Jamil Hussin and Mohamed Zaini Mazlan.

Gunasekaren, Suresh, Subramaniam and Kalaimughilan are accused of giving support to LTTE by using Facebook under different names of 'Dap Guna Palanisamy', ‘US Subra Subramaniam’, ‘RocketSuresh DAP’ and ‘Kalai Mugilan’.

They allegedly committed the offences at the office of investigating officer of E8 (M) Counter Terrorism Division, Bukit Aman Special Branch in Kuala Lumpur between Oct 7 and 11, 2019 at 2pm and 6pm.

Kalaimughilan is also facing three other LTTE-related charges of distributing items, giving support at a ceremony and giving support on the Youtube application.

For the charges of distributing items and giving support at a ceremony related to LTTE, Kalaimughilan is alleged to have committed the offences at Dewan Tan Sri Soma, Wisma Tun Sambanthan, Jalan Sultan Sulaiman, Kampung Attap in Kuala Lumpur between 8pm and 11.30pm on March 17, 2014.

For the charge of distributing items related to terrorists, he was charged under Section 130J (1)(b) of the Penal Code, which provides for a jail term of up to seven years or fine and the forfeiture of the items concerned.

For the charge of giving support via Youtube, Kalaimugilan is alleged to have committed the offence at Level 24, E8 Division (Counter Terrorism), Special Branch, Bukit Aman at 10am on June 2, 2014.

For the charges of giving support, they were all charged under Section 130J (1)(a) of the Penal Code, which provides for a life sentence or maximum 30 years’ jail or fine and the forfeiture of any property used or intended to be used for committing the offence.

Judge Muhammad Jamil set Jan 20 for case management for Gunasekaran, Jan 15 for Suresh and Subramaniam and Jan 3 for Kalaimughilan.

Earlier, the Sessions Court allowed the application of the prosecution to transfer all the cases to the Kuala Lumpur High Court.

No plea was recorded from the accused when the cases were mentioned at the Sessions Court because pleas for cases involving terrorist groups would be taken at the High Court hearing the cases.