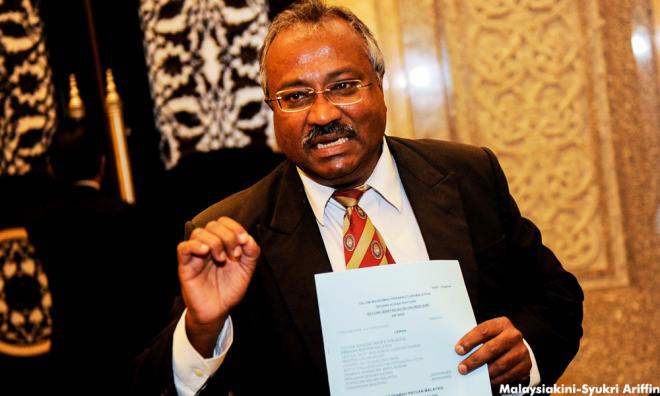 The family of the Batu Arang shootout victims have decided to boycott the inquest into the deaths and are instead demanding that the police officers responsible be charged for murder.

Speaking to The Malaysian Insight, their lawyer P Uthayakumar (above) said that the families did not have confidence in the inquest.

“We don’t accept the inquest because police are probing their own men.

“Who will probe them if they had done something wrong? That is why we need the Independent Police Complaints and Misconduct Commission (IPCMC) Act 2019.

“Families want those who shot their sons to be charged with murder. No need for an inquest,” he was quoted as saying.

The inquest was scheduled to begin on Dec 13 but it was postponed to Jan 21 next year after Uthayakumar and the family failed to show up.

The lawyer contended that it was not against the law for families to boycott an inquest.

“It depends on the family whether to attend or not. Unless the court decides to call them up (subpoena).

“For us, it’s a waste of time...,” Uthayakumar told the news website.

On Sept 14, three men were killed by Selangor police in Batu Arang, Rawang, after a shootout.

The three were S Mahendran, 23, G Thavaselvan, 31, and V Janarthanan, 40, a Sri Lankan national with a British permanent residency.

Police said two of them were triad members with criminal records and had been involved in robberies.

The families of Thavaselvan and Janarthanan later disputed the police’s version of events, demanding they publish video footage to substantiate the need to shoot-to-kill.

The families’ counter-claim is that the two men and Moganambal had gone out for dinner before they were “kidnapped” and shot by the police.

Police maintain that they had followed their standard operating procedure during the shootout, and had to defend themselves.

Uthayakumar does not represent Mahendran.