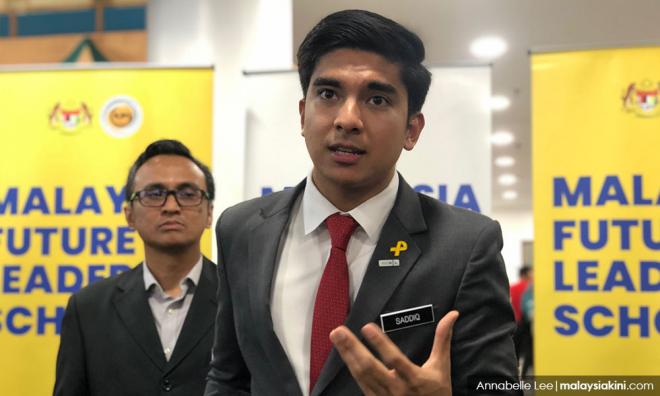 The Chinese education group Dong Jiao Zong should respect the decision of the cabinet to retain the approval for the learning of Jawi writing in the Bahasa Melayu subject including in vernacular schools.

As such, Youth and Sports Minister Syed Saddiq Syed Abdul Rahman suggested that the Chinese education group did not pursue its desire to carry out a congress to protest against the issue on Dec 28.

‘’I feel we have sought a compromise, a middle path in the matter because it had been discussed at great length in the cabinet and we have achieved a consensus.

‘’Most importantly, we must look forward because there are four major issues which Malaysians want addressed involving the economy, cost of living, housing and employment. Please focus on these four matters because they are most important,’’ he said.

He said this to the media after launching the "2019 eUsahawan Young Heroes Summit" organised by the Ministry of Youth and Sports, the Malaysia Digital Economy Corporation (MDEC) and Facebook Malaysia at the Malaysian International Trade Exhibition Centre (Mitec) in Kuala Lumpur today.

Yesterday, Prime Minister Dr Mahathir Mohamed gave his warning on the consequences if the group continued with the congress it planned, maybe resulting in the Malays also organising their congress to discuss efforts to close Chinese vernacular schools.

The prime minister also advised every party to be considerate of the sentiments of others.

In August, the Ministry of Education confirmed that it would still implement the introduction of calligraphy (khat) for the Bahasa Melayu Standard Four pupils next year as scheduled.

Meanwhile, commenting on the 2019 eUsahawan Young Heroes programme, Syed Saddiq said it was among the proactive steps of the ministry to encourage innovation, boost talent and hone the skills of the younger generation.

"They (young entrepreneurs) are indeed trained to become young entrepreneurs specifically in digital enterprises so that they will know how to promote products using high technology in the globalisation era,’’ he said.

Through the programme, the young are trained to become entrepreneurs, specifically in the digital sector, and how to promote products using high technology.

Since it was launched in 2015, the programme had successfully trained 328,948 micro-entrepreneurs nationwide with transactions in excess of RM668 million. - Bernama