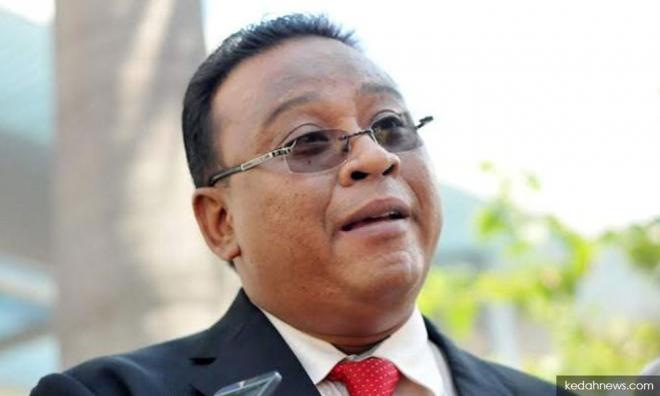 Yoursay: Khairul Azam, unity is not a synonym for subjugation

YOURSAY | ‘A legal challenge ought to be mounted, too, against UiTM for using English...’

Yoursay: Lawyer files suit against use of Mandarin, Tamil as medium of instruction in schools

GalaxyM: This cheap publicity stunt maniac may need me to teach him how to live happily in this country founded on diversity of race, religion, culture and language.

I am proficient in three languages, and I enjoy reading articles written in these languages. I consider myself lucky because I studied in a vernacular Chinese school before independence and I learned three languages up to tertiary level.

I definitely have a wider vision compared to this person so awkwardly hanging on his nauseating racist and religion bigoted outlook.

Gerard Lourdesamy: Bring it on. I am certain 100 percent that they will lose the case in court. They have failed to understand the Federal Court decision in the Merdeka University case, notably on the definition of public authority and official purpose in Article 152.

Since they are so concerned with national unity, a legal challenge ought to be mounted against UiTM (Universiti Teknologi Malaysia) that uses English as the medium of instruction and is only for Malays and the natives of Sabah and Sarawak.

That is a clear violation of Articles 5, 8, 12, 152 and 153 of the Constitution, more so where the Chinese and Indian taxpayers are being asked to fund UiTM from public funds, but a whopping 40 percent of the population are excluded from enrolment in this public university.

Furthermore, a reservation of a quota permitted under Article 153 cannot possibly be 100 percent for only one ethnic group. As such, it has been illegal for the government to fund UiTM since its creation.

If these extremist Malay/Muslim groups only believe in provocation, they should also be prepared to have their special position questioned and disputed in the courts.

How do people like lawyer Mohd Khairul Azam Abdul Aziz and politician Ibrahim Ali define "harmony," and what contributions have they made in trying to promote "harmony"?

Both of them have only aggressively championed Malay rights and privileges, and in the process caused communal friction and disharmony. Their version of 'harmony' simply means subservience of the non-Malays to the Malays, so that the Malays do not get upset and run amok.

When was the last time Khairul and Ibrahim wished members of the non-Malay communities "Gong Xi Fa Cai", or "Happy Deepavali" or "Merry Christmas"?

They carry with them the mindset of Malay supremacy and do not understand and respect the cultures and beliefs of others.

They should also face the fact that there are many students, including Malay students, from vernacular schools who have excelled in their studies and become important members of society.

The Third Man: Let’s not hide behind false pretenses. This act to deny the rights of other Malaysians, their cultural heritage and rights to learning their mother tongue, is strictly unconstitutional.

Racial harmony is about forging a true and sincere common spirit of brotherhood among all Malaysians, without having to identify any special rights and privileges. When you add exceptions to the equation, and continuously reinforce the differences, harmony will never be achieved.

We must stop such nonsense in the pursuit of a New Malaysia, where detractors like this man would never be allowed to disrupt and cause disunity among Malaysians.

Gaji Buta: Khairul Azam, please be informed that 'unity' is not a synonym for 'subjugation', which is probably the word you are looking for, but can't think of, as it has more than two syllables.

FairMalaysian: If they continue with this regressive attitude, people will move away from national schools.

The debates in Parliament are mostly conducted in Bahasa Malaysia, and Jelutong MP RSN Rayer's eloquence in the language is a joy to hear. Yes, lawmakers have been debating in Bahasa, but where is the harmony?

Khairul Azam could have cited other reasons for his case, but he is talking about unity, or the lack thereof, and he says it is because of vernacular education. Peering through racial lens only clouds vision and judgement.

Vgeorgemy: The submission of the arguments has nothing to do with the provisions of the constitution that deal with the national language. The relevant sections give the necessary rights to the minorities to learn and to teach in their languages. The sections say:

“152. (1) The national language shall be the Malay language and shall be in such script as Parliament may by law provide:

“(a) no person shall be prohibited or prevented from using (otherwise than for official purposes), or from teaching or learning, any other language; and

“(b) nothing in this Clause shall prejudice the right of the Federal Government or of any State Government to preserve and sustain the use and study of the language of any other community in the Federation.”

The lawyer is saying national unity can be achieved by adopting a single language. If that is the case, there wouldn’t have any issues between North and South Korea, Taiwan and mainland China.

Unity has nothing to do with using the same language or being from the same race, but treating everyone fairly. The legal action will not achieve anything other than polarisation.

Anonymous #33457332: Indeed, you can't teach unity. It has to evolve in an atmosphere of equality and understanding.

Anonymous_1372558750: When these bunch of idiots and losers fail to strengthen and establish the national schools as the school of choice, they simply cry, sue and hope to outlaw the other school systems.

Everyone knows how to make vernacular schools disappear by themselves without making such stupid demands – that is, make national schools produce world-class intellects that can compete with the rest of the world.

When a large majority of Malaysians have had world-class education and developed a worldview, race and religion will cease to poison the minds of people.

Existential Turd: From filing frivolous police reports, they have now graduated to filing lawsuits as a means to harass and suppress the minorities' rights.

Green Penang: Some people claim that their intentions are the opposite of their actions, and expect the world to believe them.

It takes a special kind of stupidity to become like that. This trait seems to be widespread among supporters of the ancient regime.

Hang Babeuf: And what is the marvellous Education Minister Maszlee Malik doing about this provocation?

Cannot even throw a black canvas school-shoe at it. He does not want to. He sees nothing wrong in it, I suppose.

mohd khairul azam
yoursay
vernacular schools
Related Reports
Raising alarm on potential repercussions, Anwar urges scrapping Jawi meet
a year ago
Come to the ground and listen to us on Jawi issue, says Siti Kasim
a year ago
The case for the constitutionality of vernacular schools
a year ago
Yoursay: 'In M'sia, it's ridiculous not to have friends of other races'
a year ago