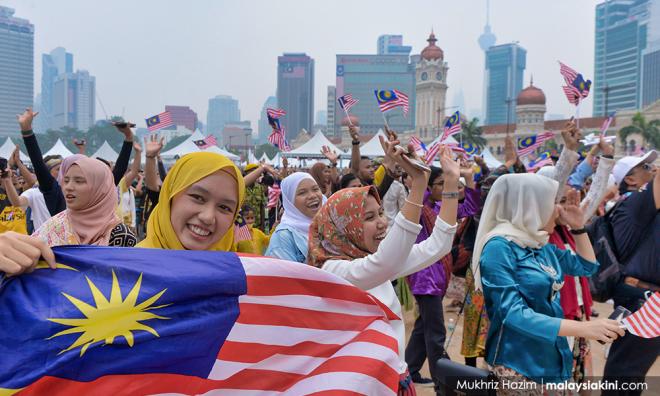 Don't fret, Malaysia can still turn it around in 2020

COMMENT | Malaysians of my generation, who are now in their 30s and 40s, have shared a powerful and potent imagination that by 2020, Malaysia would “graduate” from a nascent developing country to a proud developed nation.

We imagined that Malaysia would be an exemplary nation and that we would be living dignified and fulfilling lives.

We were probably the first generation of which so many genuinely believed in being members of a "Bangsa Malaysia", a people with a national identity that came before other identities.

The year 2020 beckons and for the said generation, a sense of anti-climax tugs at their hearts, and disappointment fills their hearts.

Symbolic dates aside, what is essential is that we should not give up on the idea that Malaysia can become a top nation that we can all be proud of and that most of us will see ourselves as Bangsa Malaysia or Malaysian first — not as Malay, Chinese, Indian, Kadazan or Dayak.

This generation is still too young to give up. We are, to be sure, at the age when we can contribute the most towards achieving our collective dream and inspire those younger than ourselves. This is still a great nation full of potential for us to build.

The failure to achieve Bangsa Malaysia and the goals of Vision 2020 is no doubt largely BN’s doing, but it was that failure that led to that coalition’s downfall last year.

Pakatan Harapan managed to topple BN but has yet to be able to convince the public that Malaysians need to come together to reform and transform the nation.

It hasn’t been smooth sailing for the new government. Half the population did not vote for Harapan and the Opposition is not interested to play democratic niceties.

Anyhow, now that the government has been in office for 18 months and is more knowledgeable about the traps, the competence and sense of purpose needed, as well as the silent and not-so-silent resistance to change inbuilt into the system, reigniting the reformist zeal should be Harapan's top priority in the new year and the new decade.

To be convincing in the important year of 2020, Harapan has to work to excite and hold the middle ground and show a unified sense of purpose.

This brings me to think of the great turnaround by former US president Franklin D Roosevelt (FDR), who came into office in 1933 in the middle of a prolonged economic crisis.

Since the Great Depression started in 1929, a quarter of the American workforce had been left without jobs. Around the time of his inauguration as president, “bank holidays” were being declared by many cities for fear of bank runs.

Adam Cohen’s Nothing to Fear: FDR’s Inner Circle and the Hundred Days That Created Modern America details how the direction of the nation was changed forever in the first 100 days of FDR’s rule.

In many ways, FDR’s New Deal — that the state has a responsibility to ensure near full employment — became the consensus for half a century until Ronald Reagan came into office in 1981.

In the case of Malaysia, Vision 2020 was an extraordinary exercise in economic and socio-political turnaround. The 1980s saw crises in inter-racial relations which pulled communities apart even more.

The October 1990 general election was a testimony to racial voting.

All that came to a stop when the Thai baht plunged in July 1997. In many ways, we are still suffering from the hangover of those heady days.

One interesting thing to remember from that time was that the political crisis that followed the sacking of Anwar Ibrahim in 1998 did not see any side trying to capitalise on racial differences to get ahead in the game.

The change back to racial politics began with Hishammuddin Hussein waving the keris, symbolising Umno's decision to turn to the right in July 2005.

Harapan’s realignment between 2015 and 2018 was a great turnaround story, too.

By the time then-Prime Minister Najib Razak sacked his deputy Muhyiddin Yassin in July 2015 over the 1MDB scandal, he had already lost his legitimacy to rule.

Yet, on the Opposition side, Nik Aziz Nik Mat (below)— the stabilising force in PAS who was against any deals being made by his party with Umno — passed away in February 2015, two days after Anwar was sent to prison. This left a huge leadership vacuum to be filled.

Around 2016 and the first half of 2017, talk about supporting a third force and not coming out to vote heightened racial and state/regional sentiments (particularly in Johor, Sabah and Sarawak) had become rampant.

It was a hopeless situation for Harapan and the nation.

It took the Opposition coalition three years to fill that position, and this was through an agreement reached on Jan 7, 2018, for Mahathir to be Harapan's prime minister candidate and Anwar to be the prime minister after him.

Now, it is true that no one expects their political representatives to be supernatural beings who can solve everything in one swoop. And very few expect them to be saints or angels.

But it is also definitely true that the people do need their leaders to get their act together. This was what Harapan managed to do through the difficult realignment between the original Harapan parties and the forces aligned to Mahathir between 2016 and 2018.

Leaders are expected to work out sensible deals between conflicting interests, point out a clear direction and bring people together, excite them enough to care and to be engaged in the country’s political fortune.

Almost everything Harapan did to come together was counter-intuitive if observed with conventional lenses, but much that seemed impossible was achieved.

It had been impossible for Mahathir and Anwar to consider making a deal. It was unimaginable for DAP to work with forces aligned to Mahathir.

It seemed crazy for Harapan parties to abandon their logo to contest under the banner of PKR. The list goes on.

These deals could be pulled off because leaders such as Mahathir, Anwar, Muhyiddin, Mat Sabu, Lim Kit Siang and Lim Guan Eng provided solid leadership.

They and most other Harapan leaders knew that failure to work together would see Najib triumph, and Harapan annihilated, and the country with it.

A turnaround like what Roosevelt managed to achieve or what Mahathir’s 1991 moment accomplished, is sorely needed today to rebuild popular confidence in the Harapan government and the nation.

Public confidence is vital for Harapan if it is to survive. Without that, voters, as well as investors, will hedge their bets.

Every segment of society will hedge their bets, and that in the end is what will bring Harapan down.

Civil servants who hedge, businesses who hedge and even politicians within Harapan will hedge as well. A hedging mass media will aim to be mischievous and negative in their reporting and analyses, instead of being rational and balanced.

Harapan must exude confidence in its ability to stay. And it can only do that by acting concertedly and convincingly.

All these will contribute to a broad sense of despair and this is easily exploited by various interest groups.

Attempts to take advantage of Harapan's weaknesses and to break the coalition will grow, as already seen in an attempt in October to sack DAP and Amanah from the government.

The collapse of the Morsi government in Egypt acts as a reminder.

A turnaround will have to include a realisation within the Harapan that if we can’t hold together, Umno-PAS will take over from mid-term. Umno-PAS will not see the need to wait until the next general election to fight a normal election.

But if Harapan does hold together well, there is, in fact, little room for Umno-PAS to gain ground.

In Malaysia, no coalition can win from an extremist posture with discredited leaders in top positions.

For Harapan to hold together, it will need to think about shaping the national agenda for the next generation.

The forces aligned to Mahathir and Anwar will have to accept that they need both to heal the nation’s past wounds, honour the deal made between them, and jointly win the next general election through Harapan, not for Harapan’s sake but to consolidate Malaysian democracy so that it won’t again fall under the power of right-wing groups.

The turnaround has to build on the reformist spirit to build democratic institutions and fight corruption and cronyism. These must remain Harapan’s core themes.

The Bangsa Malaysia project is still the best bet for the nation. Harapan has to work on the anxieties of all communities and acknowledge them while establishing itself in the middle ground to promotes a Malaysian-first mentality.

It must also be acknowledged that Najib lost the election in 2018 only partly because he plundered the nation. He also lost to a revolt against his elite-driven economic management of the country which did not empathise with the struggles of ordinary Malaysians.

Harapan will have to, for example, leave behind the technocratic concern with debt and fiscal balance started under the Abdullah Badawi regime, and instead concern itself with the creation of better jobs, better pay, better business opportunities, better living standards, and better upward mobility for the next generation.

On Dec 31, 2009, I wrote an opinion piece called Malaysia: a nation in waiting. A decade later, and nearly three decades since Vision 2020 was first espoused, we enter the next decade with a greater sense of urgency, but with hope and optimism that we can turn things around for the nation.

This generation owes it to the next to get things right.

LIEW CHIN TONG is a senator and deputy defence minister. He was formerly the MP for Kluang and Bukit Bendera.