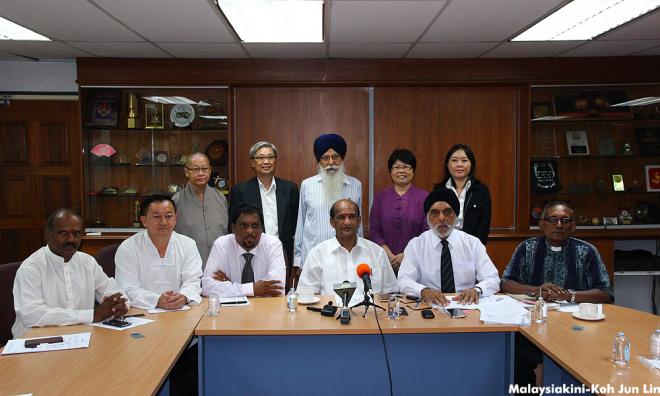 The Malaysian Consultative Council of Buddhism, Christianity, Hinduism and Taoism (MCCBCHST) is greatly alarmed by the leaked Education Ministry memo to all state education directors which appears to allow Yayasan Dakwah Islamiah Malaysia (Yadim) to carry out religious propagation activities in schools and institution of higher learnings.

"The MCCBCHST looks at the letter with “alarm” because dakwah activities are planned to be carried out on such a wide scale amongst students who are young and impressionable, innocent to worldly ways and very vulnerable," it said in a statement today.

"It also views the letter with disbelief because the schools are places of learning, to acquire knowledge, to enhance competitiveness, to learn science and technology, etc., but what is being planned appears to be the promotion of Islamic missionary activities amongst students which should not be the concern of national-type schools," it added.

"The heading and the contents of this memo leaves no doubt in the mind of readers that the clear intention was the propagation of Islam with the possible aim of proselytisation of students. There is no contrary intention shown in the memo.

"The targetted students appear to be the non-Muslims as there is no question of proselytisation of students who are already Muslims. Furthermore, Muslim students are already learning about Islam under the subject “Pendidikan Islam”, and therefore Yadim cannot be doing the same," said the leaders.

This comes after MCA President Wee Ka Siong (above) revealed the letter on Dec 23 and questioned why religious propagation was being mixed with school education.

The Education Ministry issued a denial a day after the leak, refuting claims that such an approval was an Islamisation move, saying instead that the setting up of Rakan Siswa Yadim is still subjected to permission from the respective institutions and schools, and will be limited to Muslim students who want to volunteer.

"The Education Ministry would like to stress that this is not Islamisation and does not involve non-Muslim students, as well as SJK(C), SJK(T) and missionary schools. The ministry guarantees that Rakan Siswa Yadim will be responsible for obeying existing rules and the freedom of religion for non-Muslim students," it said.

However, the MCCBCHST does not accept the explanation and stresses that Yadim is a missionary body. It claimed that the Education Ministry was trying to contain the fallout from the leaked letter.

"To contain the fallout, the Education Ministry moved quickly to issue a letter emphasising, amongst others, that the setting up of Rakan Sisma Yadim is still subjected to permission from respective schools ... but there is no such thing stated in the first memo," the leaders said.

MCCBCHST also challenged the Education Ministry's claim that the move does not involve non-Muslim students.

"The ‘pendakwa’ trainers will be Malays. Who will be their target for propagation? It appears the target will be non-Muslims as there is no need for dakwah activities amongst Muslims who are already learning Islam as a subject," it said.

It also rubbished Ministry guarantees that Rakan Siswa Yadim will be responsible for obeying existing rules and regulations, saying it would be impossible for its officials to monitor thousands of schools, and the guarantee given is meaningless.

"As such, the MCCBCHST calls upon the Minister of Education to withdraw the permission given to Yadim to carry out dakwah activities in schools and other institutions of higher learning. The schools are places of learning and equipping children with proper skills. They are not places for propagation of any faith," it added.