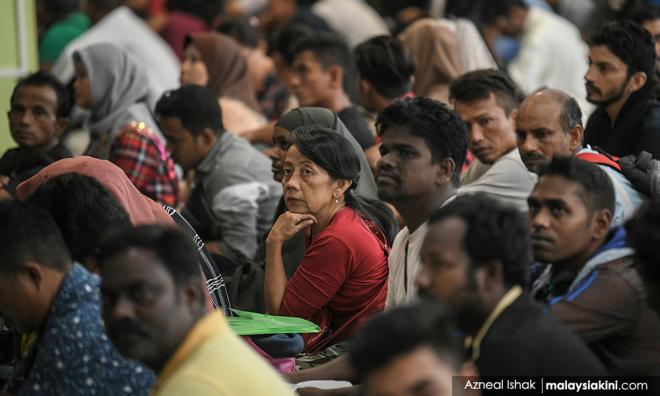 Over 180,000 repatriated under 'Back for Good' amnesty programme

More than 180,000 undocumented migrants have been repatriated under the "Back For Good" (B4G) amnesty exercise that ends at midnight tonight, according to Immigration director-general Khairul Dzaimee Daud.

In his new year's message today, Khairul described the implementation of the programme since Aug 1 as one of the department's major achievements this year.

He also identified further efforts to crack down on undocumented migrants who remain in the country as one of three major focus points for the department next year.

"For the year 2020, I have set three main focus points for the department (including) […]

"Large scale operations to crack down on undocumented migrants with a minimum target of 70,000 arrests in the year 2020 through targeted and continuous operations,” said Khairul in a statement.

Under the B4G programme, undocumented migrants may surrender themselves and pay a fine after which they will be deported home permanently.

Checks by Malaysiakini found some immigration offices being inundated with last minute-applications from undocumented migrants seeking to return home and they often end up waiting for days.

Some applicants also claimed to have been approached by touts offering various services to help "expedite" their applications.

In his new year statement, Khairul also listed other areas that his department would focus on in the coming year.

These are to improve over-the-counter services as well as improve administrative efficiency through the full implementation of its e-payment system and the National Integrated Immigration System (NIISE).

As for the department’s achievements, he also listed its success in combatting document forgery syndicates and increasing prosecution against employers of undocumented migrants as well as against human traffickers and money launderers.

“I’m confident that with strong determination and a team spirit, we will achieve greater success in 2020 for the peace and security of our beloved nation,” he said.