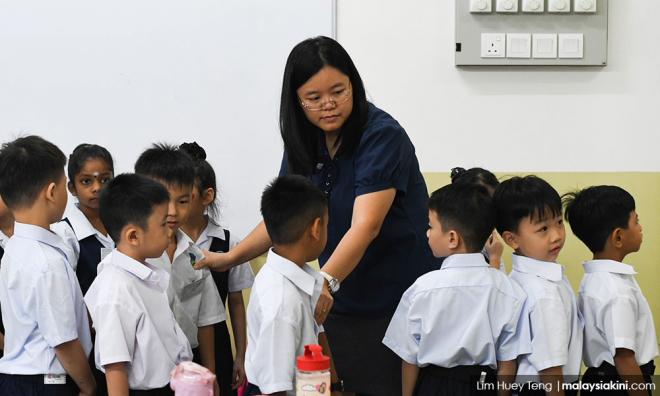 YOURSAY | 'It is time to work on having a national education system that all M'sians can trust and believe in.'

Mazilamani: Vernacular schools existed in Malaysia, albeit in a non-organised manner, even before the country gained independence and the Federal Constitution was drafted.

The multiple races were already present in this land long before the two events. Once Merdeka was gained, it was the duty of the newly-elected Alliance government to use the talents of highly-educated Malayans to give the country direction and form through the Constitution.

It is not as though the different races, religions, languages and customs did not exist or came into existence recently.

A progressive leader will recognise the existence of the different ethnicities and after understanding the properties of each community, will adopt and adapt everyone into the nation-building project to achieve the best results possible.

Collectively, we are a nation with some of the historically oldest civilisations in the world - the Chinese, Indians and Abrahamics.

Let us not permit the interference of a cleric to change the political or social landscape of this country. We already have an 'iconic' fugitive figure who has planted divisive thoughts in impressionable minds.

Anonymous 1575268017056: Racial friction will persist as long as people like Perlis mufti Asri Zainul Abidin insist on imposing Malay superiority and the Islamic way of life on the non-Malays and non-Muslims in the country.

Malaysia is a secular country with a pluralistic society, and it should remain that way.

P Dev Anand Pillai: What have vernacular schools got to do with racial friction?

If we had an able and trustworthy government which prioritises fairness, good governance and most of all, accountability, the people will definitely support such a government, be it BN or Pakatan Harapan.

But the problem is that we don't have such a government in place.

We have to accept the fact that we are a melting pot and a confluence of races and religions. Bahasa Malaysia has been our lingua franca but other languages have been allowed to be used in education as long as Bahasa Malaysia was a compulsory subject.

This policy has proven itself well over the years. It is the creeping Islamisation of the national schools which has divided the people and created strife among the races.

So, if you want to go the way our neighbour Singapore has done and proven itself as one of the best in the world, then we have got to be able to trust the people in power.

But the problem is we can't trust our politicians because they simply can't stick to one policy, they don't believe in meritocracy and they don't have a vision for a multiracial nation.

Malaysians did it well before because we had a good mix and practised meritocracy to an extent and we simply did not change our policies at whim. Our public exams were well recognised because we did not fiddle with them.

We let teachers teach and we kept politics and politicians out of our schools, so it worked.

When the multiracial character of our education system slowly gave way, it was replaced with a mono-ethnic wave which took over and made national schools mini-madrasahs. How then can a multi-ethnic composition like Malaysia continue to rely solely on the national schools?

Stand By Truth: Asri is totally right. Just look at Indonesia, where people of all ethnic groups can speak proper Bahasa Indonesia language. Everyone there has an Indonesian name, regardless of their religion.

In Singapore and Thailand, children of all races mix together since young, due to the schooling systems in the two countries. There must only be a single school system in Malaysia, for the children to have a chance to mix and grow together, thus strengthening the country’s racial unity.

Our education system, especially in national schools, is outdated and not inclusive of the changes happening around us. Instead, emphasis is placed on the learning of a single religion.

Singapore has never changed its education system - instead, it has consistently modified it to cater to the current situation.

Why are people sending their children to vernacular schools? It is not because of race or religion, but the decision is made solely for the quality of the education provided.

Anonymous 435551439668541: Yes, if the Malaysian education system is good enough, then why are the children of ministers and political leaders not being sent to the sekolah kebangsaan (national school)?

It is time to work on having a national education system that all Malaysians can trust and believe in.

Anonymous 3b6c1f0c: It is the kind of inflammatory statements made by Asri seeking to justify the assault on other races' way of life and belief that creates tensions.

The Perlis mufti is increasingly fond of wading into extremism and propagating as mainstream the position that as he is from the race and religion that are the majority in this country, he has the right to require and impose any policy on the minorities, regardless of the harm and prejudice it causes to the latter.

An increasing number of Malays and Indians are also enrolling their children in vernacular schools, particularly in Chinese schools. So obviously, all these parents regard the quality of education on offer there as being of a higher standard than that offered by national schools.

By only pointing out vernacular schools as the source preventing racial integration, Asri has conveniently ignored the presence of boarding schools, Maktab Rendah Sains Mara (MRSM) schools, pondok and tahfiz schools, Universiti Teknologi Mara (UiTM), and other similar learning institutions which only have a single race or a vast majority of a single race.

If the vernacular schools are to be abolished, then these learning institutions, which do not permit social integration and interaction among the different races and religions, should also make way in the name of national interest.

Anonymous 435551439668541: In order to create a truly Bangsa Malaysia, the closure of vernacular schools alone is not enough.

One should instead work hard on being a Malaysian by getting rid of the politics of race and religion and focus on the pressing needs of all Malaysians, such as improving the economy and education.

The government then needs to arrest and investigate those who threaten violence and a repeat of May 13. Terrorism must not be allowed to prevail in Malaysia.

Anonymous 1570780627207: I agree with Asri that the presence of vernacular schools is detrimental to national unity.

However, the authorities need to take it further by abolishing every single thing which is preventing the creation of a Bangsa Malaysia, such as the existence of the race and religion information in official forms, documents and even in the national identification card (IC).

Anonymous 1381287629: Indeed, racial friction will persist as long as policies that favour only a single race continue. Every citizen should not be identified by the ethnicity but as Malaysian. Stop talking about Malay supremacy as all races are equal.

In fact, does supremacy mean the Malays in this country are ready to compete with others on equal footing, without preferential treatment or benefits?

When can we see a truly new Malaysia? Sadly, I believe it will not happen in this generation.