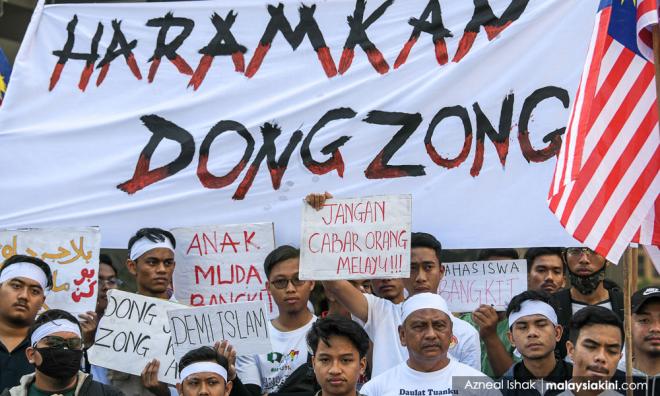 Yoursay: Dong Zong court order – a reward for the aggressors

YOURSAY | 'It is just like the police arresting the victim of a crime instead of the criminal itself.'

MCA: Don't Chinese have a right to assemble?

Drngsc: For once, I agree with MCA secretary-general Chong Sin Woon. Do non-Malays not have a right to meet behind closed doors to discuss issues? Where is their freedom of assembly?

If you give in to bullies once, all you get is more bullying. Dear inspector-general of police/(IGP)/magistrate, do Malaysians have a right to meet privately and discuss issues pertaining to our country?

Is it not the duty of the police to maintain law and order? Or is this a totalitarian country where citizens have no rights?

Please know that foreign investors are watching and this court ruling does not look good for Malaysia.

Steven Ong: ''According to the court order sighted by Malaysiakini, Kajang magistrate Syahrul Sazly Mohd Sain granted the restriction order in view that there would be a breach of the peace if the meeting was allowed to proceed.''

By using this as an order to stop the meeting, the judge, police and ministers are saying that certain Malaysians most likely will use violence as a means to enforce an artificial peace in this country.

This only confirms what Prime Minister Dr Mahathir Mohamad had said - that certain Malays will do the Malay thing. So let’s hear from the other Malays who don't support this behaviour.

Bluemountains: Under our laws, when some groups threaten to create trouble, the police must take action against the aggressors.

Is this the new standard operating procedure (SOP) of the Royal Malaysian Police (PDRM)?

Anonymouss: The modus operandi is very simple. Get a few groups of people to issue threats, make provocative statements and spew racial rhetoric.

The police will then take action to stop the meeting on the grounds of security. So each time a minority group wants to assemble and if not to the liking of those racist majority, the same modus operandi will be used.

Of course, the minority group cannot use this against the majority. Is there justice or justice only for the majority?

2 Cents: Stop manipulating the issue further, MCA. Dong Zong made it very clear that the issue is about education, and not racial.

MCA, you don't have to stoop so low by trying to make it a racial issue.

JW: There has been talk of the deep state in recent months. But given what has transpired regarding the police report on Dong Zong's call for a congress on Jawi and the swift decision made by the magistrate, there is no need for such a deep state to even materialise.

It's a decision made in broad daylight with the police and the magistrate openly acting to reward those who threatened violence and punish those who promised to conduct a closed-door peaceful assembly.

Shame, indeed, on the Harapan government to let the police appear to have more power than them, as though we are living in a police state.

Although MCA is obviously taking advantage of this issue to score political points, especially at the expense of DAP, who would blame them?

Only Truth: The situation should have been settled this way - the PM should have addressed the issue by advising all the NGO bullies that everyone has a right to assemble and discuss the khat/Jawi issue.

They should have been advised not to resort to bullying and threatening. The court order is not the Harapan way.

Anonymous_f0124ca6: Dong Zong should take the police to task by challenging the injunction. That way you get to test in court your criticisms of the pre-emptive injunction.

The judiciary needs to learn, understand and appreciate that peaceful assembly is an important pillar of freedom and justice. We should start showing trust in them and hope that the trust is not betrayed.

If the judiciary fails to live up to its role, then we should expose them and give them their just dues.

PCIM: I thought when Mahathir was given the second chance to redeem himself, he would seize the opportunity to correct all the wrongs that he had done and be remembered as a great statesman.

I was so wrong. He seems to inflict more hurt on the minority groups and antagonise other countries and causing hardship to businesses, such as our palm oil industry. It’s so sad.

FairMind: Don't fall for the tricks of Mahathir by being angry with Pakatan Harapan. Don't you see Mahathir is deliberately playing to lose GE15 because he has to hand over the reins to PKR leader Anwar Ibrahim shortly?

Then he will hop back to a leaderless Umno which still has a lot of money stashed away to perpetuate his dynasty.

Anwar and DAP are the losers when people are angry with Harapan. It's killing three birds with one stone. Does anyone think Mahathir does not know that Harapan will lose the next general election?

PKR and DAP better wise up to this old fox's plan by putting him out to pasture.

HanafiahPuteh: The Malay Dignity Congress by the majority race, which spewed hate speeches, was allowed without any thought. But a closed-door meeting to discuss a matter involving a minority group is denied.

What a joke in new Malaysia by a PM who promised openness. Today, he is taking the nation back to a police state. This is so pathetic and disappointing.

Dizzer: Don't the Chinese have a right to assemble? Errr, no, they don't.

The signals have already gone out from Mahathir and his ideological allies in Umno and PDRM that 'the Malays will act like Malays' (insulting code words for the assumption that substantial number of Malays are violent, unthinking, bigoted thugs).

Clearly, that's untrue but it's the elite narrative, and it justifies their position at the top of the politico-ethno-religious pile.