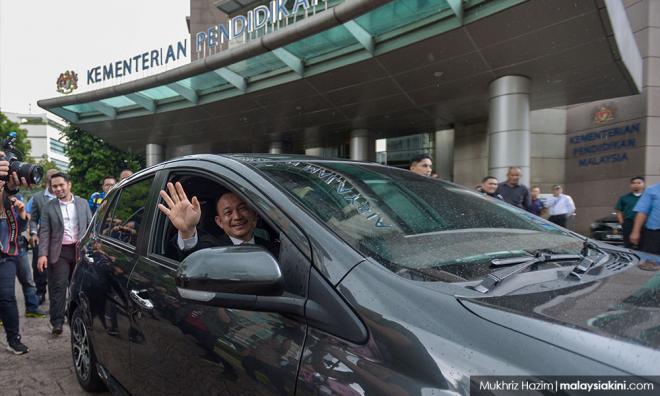 Yoursay: It is vital to appoint a competent, visionary education minister

YOURSAY | Don't fool around, play politics with our children's education and future.

Evin K: The Ministry of Education (MOE) has been one of the most, if not the most, controversial ministries following GE14. For almost two years now, it felt as if the education of our children has been taken hostage by some strange foreign force.

No other Pakatan Harapan minister has been in so many predicaments since taking office as much as former education minister Mazlee Malik. There seems to be no end to the string of distress coming from his ministry, perhaps due to his sheer inexperience, or worse, ulterior agendas. The deep state, if there was such a thing to begin with, appears to have been having field days after field days at the MOE.

The recent university exam question hailing controversial preacher Zakir Naik as an icon was perhaps the straw that broke the camel’s back, and in avoiding further damage to the MOE and the Harapan government, Mazlee had to be reigned in. His impending resignation was clearly inevitable.

I hope that this new year and the next decade will bring in revived hopes and overdue reforms that our education system desperately needs.

Vgeorgemy: We still wonder why Maszlee took certain deliberate steps to interfere in the affairs of the linguistic and religious minorities. As a Malaysian, he should have known the necessity of vernacular schools in the country. It is for religious, cultural, economic and social reasons.

The religions of minorities are legally prohibited from using certain words of the national language for their religious scriptures, chanting and public prayers. In education, the minorities are excluded from the publicly funded higher educational institutions, forcing the linguistic minorities to study overseas.

Minorities are also forced to seek employment in the private sector dominated by foreign investors due to the unavailability of employment opportunities in the public sector. Maszlee should be aware of the realities as he has the benefit of the mixed marriage tradition.

The concerns of the minorities are not manufactured lies but the simple truth of minority life in Malaysia. What Maszlee requires now is to learn the importance of race relations and ethics in a multi-ethnic country such as ours. International courses are addressing such topics. Maszlee must sign-up for such courses for the sake of his constituents.

Apalah: Did Mazlee ever said: “I tried my level best but that was not good enough”? He does not examine himself on his shortcomings but rather blame others for his downfall. Isn’t that rather familiar in Malaysian politics? Emulate the Japanese. When you have done something wrong, admit it and resign. Then apologise to the nation for your mistakes and not glorify what little was ever achieved.

Siva1967: Dear Maszlee, this is a wise thing to do and this act alone earns praise. You have shown the correct action of resigning when the odds are stacked against you. Regardless of your action, the damage is done, it is for the PM to choose the right person to head that ministry and undo the damage that has been done.

Your action shows that you are man enough to own up to your deeds. This sets the stage for the rest to follow - and better for the underperforming ministers to step down and before one is "forced" to do so.

Clever Voter: Politicians are usually sensitive to public opinions. Maszlee is no exception. He has been on intensive care supported by none other than Mahathir.

Maszlee’s resignation is inevitable. He displayed no compassion, demonstrated little understanding of the education trends, developments and segmentation. He was neither a politician nor a policy technocrat and has no vision to push for real change. Inspired by a local cartoon, he showed no knowledge of the challenges faced by urban parents.

His one size fits all has been ridiculed by many and the last straw was pushing Jawi into the curriculum. There are three things that urban folk would not compromise - good education for their children, affordable housing and responsive health system.

The country has grown up. Maszlee hasn't and he lives in a world best known to him. Detached from what people need, giving children free breakfast wasn't good enough. He could not be a mum to all, and he needs to be a responsible education minister for the sake of the future.

Unfortunately, he has turned out to be a great disappointment and was totally out of his depth for the job. Hopefully, the successor will be competent, for the sake of the country and the younger generation.

Mazilamani: Good riddance. If he had overstayed our generosity, our children will be attending pondok schools tomorrow. Good that Prime Minister Dr Mahathir Mohamad, through his fatherly advice, showed out the gate.

Now it is time to appoint a visionary education minister who will take us out of our 60-year historical rut by catering for a futuristic education system that integrates and unites our Malaysian students.

Mahathir, our children must be launched forward to be able to compete and be on par with international students and our graduates accepted for employment in all the Fortune 500 companies. I want people to remember you for your education awakening, not for the crumbling buildings that decorate Putrajaya.

Bruclax: Well Mazlee, I hope you are keeping track of the comments. Very few in your favour for obvious reasons. Albeit you had the courage to take responsibility and resign, which was non-existent when the previous regime was mismanaging the country.

What is vital now for the country is the replacement. I shudder to think what’s next as Mahathir may decide to hold the portfolio until Anwar Ibrahim takes over (we hope and pray). This is a portfolio that has the power to decide the future of this country. Mahathir has to appoint a very strong candidate.

Honestly, I do not see anyone in the current line up. If Harapan is serious about the future of this nation, the candidate must have strong credentials. Anyone who even reeks of racism must be avoided at all costs. There must be a consensus among the parties. Going by the selection of some of our cabinet ministers, I do not have the confidence of the impending replacement, if any.

The survey by Malaysiakini on our ministers was spot on. I hope those that are bouncing at the bottom will have some self-respect and follow what Mazlee did.

Bobster: Please nominate a high-calibre candidate like academician and international columnist Azly Rahman as new the new education minister. Don't fool around and play politics with our children’s education.

You need a candidate who can act above politics, be impartial and possesses the experience, passion and vision for the formation of new policies to prepare young minds for a globalised society.

Azly fulfils the criteria of an education minister. This is a low hanging fruit waiting to be harvested. Again, stop playing politics with our children’s education and future.

Cascara: Malaysiakini should hold a poll as to who should be appointed as the next Minister of Education. My vote will go to Rafidah Aziz, without reservation.