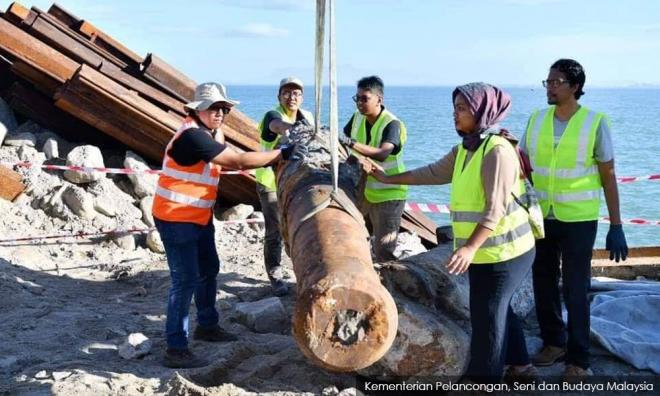 Two more old cannons were discovered during works to strengthen and reconstruct the seawall along the coastal road of Jalan Tun Syed Sheh Barakbah (near the Esplanade) in George Town, Penang, on Dec 9 and 27, respectively.

Tourism, Arts and Culture Ministry secretary-general Noor Zari Hamat said the two cannons, measuring three to 3.6 metres high, were accidentally discovered during work to strengthen the seawall which was carried out by the Penang City Council in collaboration with the George Town Conservation and Development Corporation and Think City.

"This project site is located within the George Town Unesco World Heritage Area Zone and the Buffer Zone for the Fort Cornwallis National Heritage Site.

"After this, the National Heritage Department will work with Universiti Sains Malaysia Centre for Global Archeological Research (USM CGAR) to carry out the conservation and preservation work on the cannon," he told a press conference on the discovery of the two cannons yesterday.

Previously, two old cannons, with a height of 2.35 metre and 2.2 metres, believed to be built about 200 years ago during the reign of King George III (1760-1820), were discovered by the USM CGAR team during their excavation work around Fort Cornwallis on Feb 19, 2018.

Noor Zari said the ministry had yet to ascertain when the cannons were actually built but did not rule out the possibility that it was during the 17th century.

"Although there's an indication that they were built in 1757 (before Francis Light came to Penang), but the exact time can only be determined after USM has done the cleaning and necessary work.

Meanwhile, Penang Chief Minister Chow Kon Yeow, who was present at the press conference, said the state government intended to move the two cannons into Fort Cornwallis and placed them together with other cannons to reduce the process of degradation and damage, as well as to facilitate conservation work.

"Shifting the cannons into Fort Cornwallis is expected to enhance the heritage value and attract more visitors, as well as academicians, to the place.

“MBPP has also agreed to cover the cost, while the state government will allocate RM80,000 for the conservation work," he said.

Despite the discovery of the cannons, Chow said the state government did not plan to carry out excavation work around Fort Cornwallis.