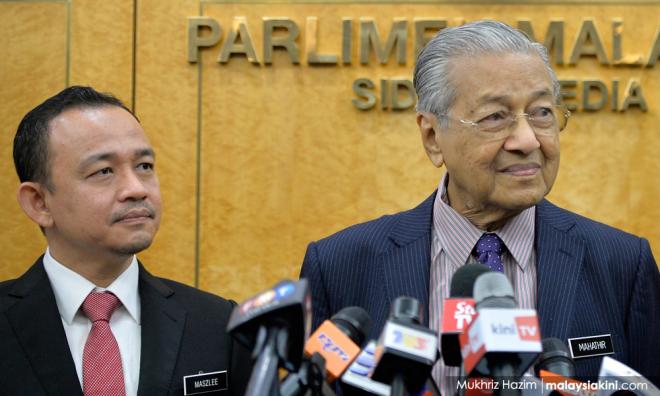 Report: Maszlee asked to quit for going against cabinet

Prime Minister Dr Mahathir Mohamad had urged Maszlee Malik to quit as education minister for going against cabinet decisions, according to a report by The Malaysian Insight.

Claiming to have sighted the letter, TMI reported that the letter was sent to Maszlee on December 27 last year but Maszlee was on holiday with his family in the US at the time.

Describing the letter as a "17-paragraph missive", the article claimed that Maszlee failed to follow cabinet's directive on the teaching of Jawi in schools, free internet service for schools and the free breakfast programme for pupils.

According to the article, Mahathir ended the letter with the words: "It is now time for Yang Berhormat (Maszlee) to withdraw from the cabinet."

Malaysiakini is unable to independently verify the authenticity of the article and is currently attempting to contact Maszlee for a response.

Maszlee tendered his resignation on Thursday after meeting Mahathir.

Following the meeting, Maszlee said he was the victim of negative media reports which did not focus on the ministry's many achievements over the past 20 months.

"In the end, I as the education minister was seen to have created many crises for the leadership, such as on Jawi, Internet at schools, and the free breakfast, among other issues," Maszlee said.