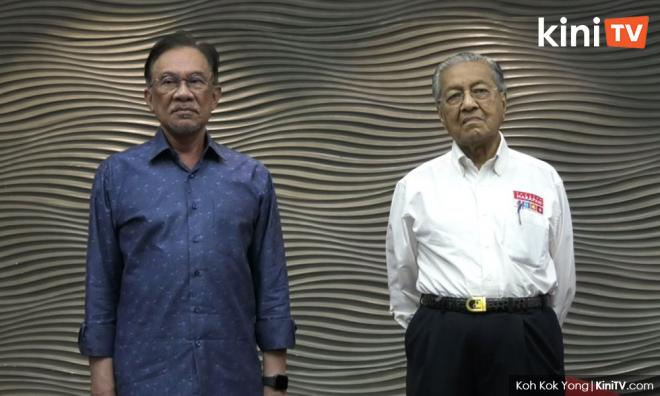 Yoursay: Harapan's blind obedience to Dr M no different from BN's to Najib

Kim Quek: Just because there was no fixed date, Prime Minister Dr Mahathir Mohamad is justified to hang on and on, and on? Is that it, Pakatan Harapan chief secretary Saifuddin Abdullah?

If Mahathir was a man of honour, he would have passed the baton to PKR leader Anwar Ibrahim upon the latter entering Parliament, having understood full well then that he was only a stop-gap PM for Anwar, pending the latter’s legal qualification to take up the premiership.

Mahathir should be grateful to Harapan supporters, the Harapan leadership and Anwar for allowing him to stay until now.

A graceful exit now will earn Mahathir gratitude all round while an ugly struggle to hang on may result in unpredictable adverse consequences for Mahathir himself, as well as a possible spillover effect on the coalition and the country.

Please be aware that the choice is not only Mahathir’s but the Harapan leadership’s as well, which retains the final say.

Brahman: Saifuddin is supposed to be a principled politician and suddenly he became a Mahathir apologist after tasting what's it like to be on top of the world.

Not only just him, even DAP veteran Lim Kit Siang, DAP secretary-general Lim Guan Eng, Bersatu president Muhyiddin Yassin, Amanah president Mohamad Sabu as well as all those in the cabinet, except for a few people, suddenly became Mahathir’s gutless obedient “rah-rah” boys?

As for the argument that transition has no fixed date, does this mean that Mahathir could hand over power to Anwar a few days before dissolving Parliament for GE15?

And these sycophants will still praise him for fulfilling his promise, oblivious of what those who voted Harapan to power think.

Capo: Saifuddin, we heard two years’ time frame for Mahathir to stay as an interim prime minister loud and clear during the last election’s campaigning and the electorate sanctioned it in GE14.

So effectively, if you say there is no dispute over Anwar to become the eighth prime minister, then Mahathir has to resign or be sacked on May 9, 2020.

Consider this two-year period as a verbal contract that Mahathir and Harapan leaders made with the electorate during GE14. So, constantly saying there is no time frame is false and treacherous.

Anonymous_2d09ced0: Is the Asia-Pacific Economic Cooperation (Apec) summit more important than fulfilling promises to the people? Apec can still go on without Mahathir as PM.

The Harapan presidential council should have the authority, courage and vision to decide on the transition date. It is not the sole decision of Mahathir.

The problem is the presidential council seems to be so afraid of Mahathir that it shows little or no difference compared with BN’s blind obedience to former prime minister Najib Abdul Razak on 1MDB.

The vision of the country starts at the top. Obviously, the top is out of touch with the people.

DAP leaders Lim Kit Siang and Guan Eng, as well as the other leaders, are now singing a different tune and thus, have lost the trust and confidence of the people. Power and position are now more important than principles for them.

Odysseus: We believe in what you say, that there's no fixed date agreed by the Harapan’s leaders. We are fine with it.

However, given Mahathir’s bad performance, where he is not working to build a harmonious country but playing racial and religious politics to split the rakyat, it's time for us to set a date for him to leave the scene.

He has done nothing good for the country for the past 20 months. People are upset. The economy is tanking and feel-good factors are gone. If he is still around, Harapan will lose in GE15

Anonymous_51096329: Most foreign investors have adopted a wait-and-see attitude following all these great uncertainties due to the lack of political stability in Malaysia.

As long as Mahathir is not stepping down - to give certainty to Malaysia’s political scenario - the country’s economy will remain in doldrums as nobody believes he will pass the baton to Anwar.

Quigonbond: Indeed, Harapan parties and ministers appear to be missing the point. Mahathir is in his sunset years. Even if some of them are motivated not to let Anwar become PM, he is running out of time.

We need a leader, any leader, to take up the cudgel and start leading while he is around so that there is continuity, so to speak. You can't wait for the last minute for that to happen. It will be a succession nightmare and quite frankly, a disastrous form of management.

This is not to mention the utter economic irresponsibility as foreign investors are picking and choosing various investment destinations. Although some are willing to invest in Malaysia, they are waiting out the political uncertainty.

The longer this drags on, the worse it is for the economy. They are so closely interrelated that our leaders must be blind and deaf not to recognise this.

Those like former international trade and investment minister Rafidah Aziz, of all people, should understand this. Some people may not be inspired by Anwar, but he is careful not to rock the boat – he has missed one opportunity the last time. Let him become PM and then we can fairly judge him.

Besides, if not him, is there really any other serious contender? Maszlee Malik's resignation as education minister can be seen as a good start that maybe, out of the public’s eyes, something is being done within Harapan.

Bersatu is a minor party and ought to be put in its place. You've got to take your hats off to the voting public in GE14 for their collective wisdom.

Bersatu is not a major party for a reason compared to PKR and DAP, which are major parties. It's time to let proportional strength in parliament be reflected in the cabinet’s composition.

How come Mahathir can defer the dates as his wishes? This means all Harapan leaders don’t have the guts to tell him off due to his position as PM.

And Justice For All: Why would PAS president Abdul Hadi Awang, of all people, have a suggestion on the transition.

That would be like a wolf making suggestions to the shepherd about who would be the best person to ensure the safety of the sheep.