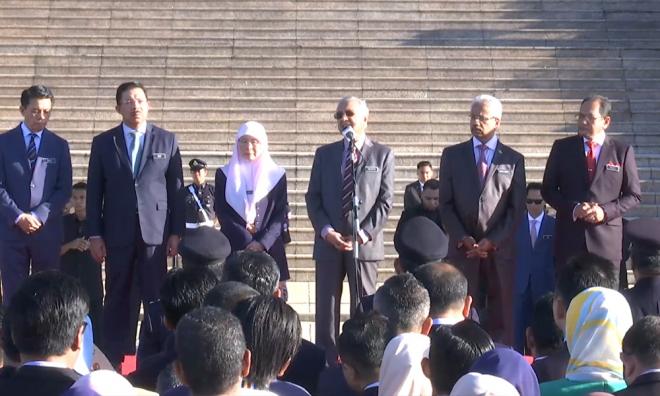 New year resolutions should be made not just for self-benefit but also the success of the country, said Prime Minister Dr Mahathir Mohamad.

Mahathir said if all quarters including the government machinery worked hard, Malaysia would achieve its objective of being on par with developed countries.

"I hope 2020, which is a very significant year for us, will mark the year we take the step to bring success to our country, so that in 2030 we will be recognised as a developed country,” he said when addressing staff of the Prime Minister’s Department (JPM) today at their first assembly for the year.

To achieve this objective, Mahathir said, Malaysia would venture into sophisticated fields so that it would be seen as a developed country which is modern and could compete with other developed nations.

He said Malaysia was now capable of participating in and manufacturing its own products in the technological field.

"Today, for example, we can produce drones, a sophisticated type of equipment needed for national development, and we will continue to be involved in other sophisticated fields,” he added.

Mahathir also stressed the need for ministers and government officers to cooperate to ensure that all national development policies could be implemented successfully.

"We have introduced a new policy, that is the Shared Prosperity Vision; we not only announced this vision but we should implement it too.

"For this, a lot of work has to be done by both sides, the government elected by the people and the existing government machinery. This cooperation is crucial to the success of our country,” he said.

He advised all quarters to set aside their personal feelings and focus on the country’s development.

The prime minister said while the government would take steps to help the low-income group, it is important for them to embrace these measures.