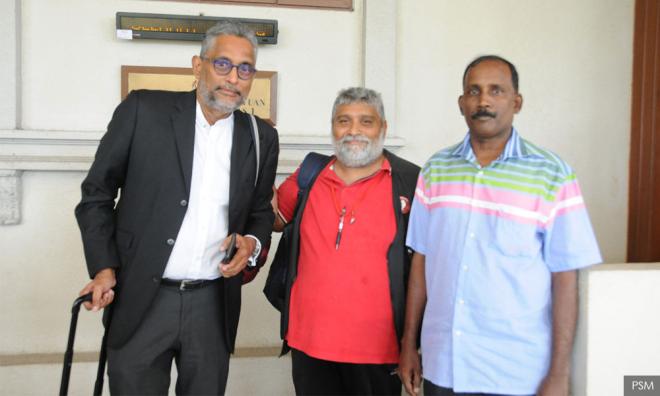 PSM has expressed dissatisfaction over a Kuala Lumpur High Court decision to dismiss the case of a purported unlawful dismissal of a former security guard at the US embassy.

The High Court judge Nordin Hassan had today ruled in favour of the US government in their application and quashed a referral by Human Resource Minister M Kulasegaran in ordering the case of Subramaniam Letchimanan to be referred to the Industrial Court.

"PSM strongly feels that the court has failed to protect a simple security guard seeking justice from a powerful country.

"With this judgement, it means the thousands of Malaysian citizens working in foreign embassies all over the country will have no protection under Malaysia's law.

"Subramaniam will appeal against this unjust judgement...therefore, it is good to get the matter finally settled at the Appeal Court.

"PSM also urges the Human Resource Minister to continue to appeal and fight this decision because it jeopardises the rights of Malaysian workers," said PSM deputy chairperson S Arutchelvan in a statement today.

It was previously reported that in May 2019, Subramaniam will finally have his case heard before the Industrial Court after 11 years.

The former security guard at the US embassy had worked there for over 20 years when he received a phone call from his supervisor on April 4, 2008, informing him that he had been terminated with immediate effect.

PSM, who had been helping Subramaniam push for his case since 2008, said they wrote to Kulasegaran in July 2018, after which a reconciliation meeting was called.

The case was then heard before the Kuala Lumpur Industrial Court in May 2019.

Arutchelvan claimed in the statement today that the US government has since made all efforts to fight the dismissal by invoking diplomatic immunity under the Vienna Convention 1966 as well as under Article 31 Act 636 where the US embassy has legal immunity from criminal and civil suits when they are conducting official duty.

The court today then ruled that the US government has immunity, with the US naming the Human Resource Minister as the first respondent, the Industrial Court as the second respondent and Subramaniam as the third respondent.

Arutchelvan said Ragu had argued that the case must be heard under Malaysian jurisdiction and the US does not have absolute immunity and cited UN, EU and UK examples that support such cases does not give the foreign government immunity over local laws.

labour
wrongful dismissal
us embassy
psm
Related Reports
PSM slams 'arrogant' US Embassy, urges minister to press on with 11-year case
a year ago
After 11 years, court to finally hear guard's claim of unlawful dismissal
a year ago
With suspension, MTUC cannot disburse RM1m compensation to workers
a year ago
Standardise minimum wage at RM1.2k across the board
a year ago