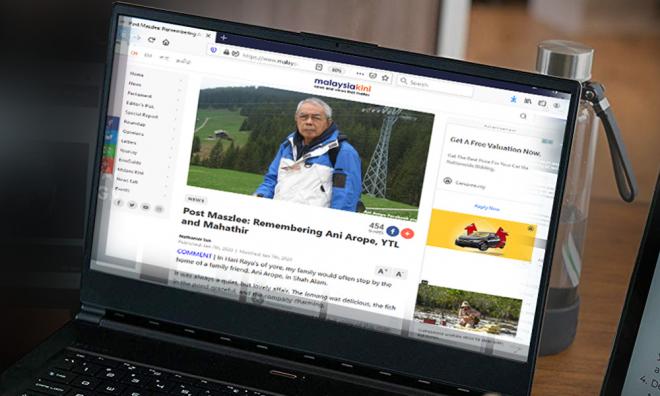 COMMENT | We refer to the article entitled "Post Maszlee: Remembering Ani Arope, YTL and Mahathir" written by Nathaniel Tan that appeared in your news portal on 7 January 2020.

In the article, the author attempts to draw a connection between several disparate events, some of which involve YTL and some of which are totally disconnected.

The article gives a certain slant to these events and concludes that the removal of the late Ani Arope as executive chairperson of Tenaga Nasional Berhad (TNB) was to facilitate a YTL project and implies that 23 years later, Maszlee Malik's departure as education minister on the prime minister's advice, is for a similar intent.

Nothing can be further from the truth. YTL respects the expression of opinions in matters of public interest, but we expect these to be substantiated and objective.

Many of the statements made in the article are factually incorrect, unsubstantiated and made out of context.

Ani Arope was initially chairperson then executive chairperson of TNB from its corporatisation in 1990 until Aug 31, 1996.

In Tan's article, the author reminisces about Ani Arope and speculates as to the reason behind his replacement as the executive chairperson of TNB.

The author cited a quotation from an article that appeared in Kinibiz in 2014, which read: "... Ani stood his ground as executive chairperson of TNB at the time in refusing to sign the very first power purchase agreement (PPA) for YTL Power’s benefit...”.

The author then concludes, "Long story short, Ani was eventually replaced, and YTL Power got the PPA they wanted."

The above is patently wrong.

Many will recall that in 1992 the country experienced a nationwide blackout. As a consequence, the government introduced independent power producers (IPPs) into the power industry to address the shortage of power in the country.

YTL Power, one of the first generation IPPs, signed a power purchase agreement (PPA) with TNB in March 1993 and commenced operations in September 1994. By 1996, there were a total of five IPPs in operation.

On Aug 3, 1996 the nation experienced yet another major blackout which was far more extensive than the 1992 blackout, this time caused by the tripping of a transmission line near the TNB Paka Power Station.

A week after the blackout, the government announced the appointment of Ahmad Tajuddin Ali as the new executive chairperson of TNB, replacing Ani Arope. Asiaweek in a commentary on the week of Aug 23, 1996 attributed the change in leadership to issues around the reliability of supply.

Evidently, the change in leadership at TNB that took place in 1996 after that subsequent nationwide blackout, had nothing to do with the signing of the PPA with YTL back in 1993.

In the article, the author continues to build on his flawed conclusion by drawing on a report in The Edge Markets on July 5, 2019, headlined: "We rejected YTL's six-month free internet service to schools due to hidden costs - minister".

It sets out selective excerpts from only the press statement issued by education minister in response to YTL's press release of July 3, 2019 and comes to a further conclusion "... which turned out to be free internet that was (of course) not in fact free."

However, YTL's numerous statements on the matter and its very specific point to point rebuttal is a matter of public record as also noted and reported by Malaysiakini and The Edge Markets.

We are therefore disappointed that despite the availability of information, there was no balance in Tan's article on this matter.

The ministry had requested for free internet services and we had unconditionally made the offer in good faith. There were no hidden costs as the ministry was fully aware of the costs of the project, having awarded the contract after an open tender and implemented phase 1 and phase 2 over the past 7 years.

We take offence at the insinuations and conclusions sought to be made by the author in the article. The unfounded and untrue allegations in the article have caused serious damage to our reputation and we expect these to be duly corrected.